After my initial research phase, I had some thoughts on how this track would end up looking but the track doesn't really start to come together until I watch the race run with real F1 cars.

Thanks to the modern miracle of the DVR, I watched this past weekend's Bahrain race over the last couple of nights.  During the pre-race I may pick up a few thoughts from the commentators about parts of the track and sometimes I get to see another qualifying lap but the best part of the race for me are the first couple of laps -- especially lap 1.

I'm looking for a couple of things during the race itself.  Where are the best opportunities for passing on the track?  What lines do cars take through the corners -- especially when more then one car is going through the corner at the same time.  The ideal racing lines are easy to figure out.  What it looks like when 2 or 3 cars try to go through a corner wheel-to-wheel is impossible to figure out until you see cars try to do it in real life.

From the game perspective this all translates into corner layout and track width.  Corner layout, to me, is the core of track design.  The speeds and positions of the corners define a track in a very real way.  Most tracks also have a couple of corners that are either signatures for the track or just more interesting or important then the others.  For Bahrain I focused on corners 1 and 13. 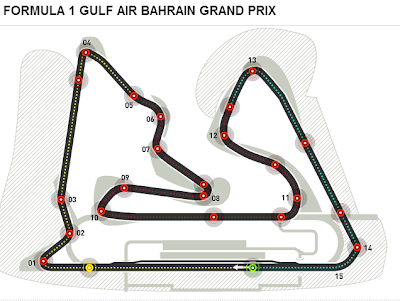 Sunday night I got through pre-race and about the first 15 laps of the race.  By now I had worked through several different rough ideas about corners and track widths in different places.  Not too far into last night's watch of the remainder of the race I had settled on track widths and where the corners would be and started sketching out ideas for the layout of the important corners on scratch paper while I watched the race.

After the race was over I rewound back to the start and watched the first half of lap 1 again.  Then I sat down and roughed out the more straight forward corners and how long I thought the straights should be -- mostly based on top speeds achieved at the end of those straights and distances between corners.

Note, I'm going to start off referring to corners by their real world numbering by default. 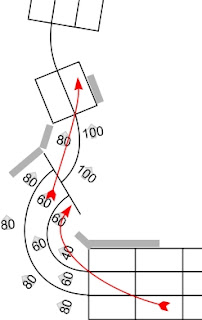 Corner 1 was great fun during the race with lots of wheel-to-wheel action and I quickly decided that this would have to be the most interesting corner on the track.  While most corners really have one good way through them, this corner almost demanded a good secondary line.  During pre-race I decided that a couple corners I thought I could ignore might need more attention including corner 2.  But I didn't want the track to end up with too many corners so I ended up squishing corners 1 and 2 into a single speed circuit corner.  I often end up doing this.  There is a huge difference between having 2 corners a space or 2 apart and having 1 corner that is a couple spaces longer.  Although sometimes, having two separate corners makes more sense.  Corner 1 went through the most iterations during this part of the process but I like where I ended up here.

I decide that corners 9 and 10 will become a single speed circuit corner... but a more interesting corner then the usual layout.  On track, the corner speeds drop considerably from 127 to 39 MPH between the two corners.  So I end up with a corner where the speed of each space in the corner is slower then the speed of the space in front of it... in the inside lane the speed actually goes from 100 to 60 in one space.  In the outside the corner speeds start at 100 then go to 80 and then 60 in three spaces.  No line for this corner.

Corner 11 becomes a straightforward corner (#6) on the speed circuit track.

Corner 12 was another corner I was planning to ignore.  But during pre-race it was lumped in with corner 13 a lot as essentially a very long two-apex corner.  So I ended up doing something similar to the layout I used to squish corners 9 and 10 together, but made it longer and more gradual.  Its also a corner that gets slower as it goes, so that seems like it will work.

Note that I'm now going to refer to corners by their speed circuit numbering.  (See below.)

I went back and forth on track width.  Visually I found it hard to tell if there were parts of the track that were noticeably wider then others.  But when I do a track, I end up paying as much attention to how a track races then how wide it really is.  Most of the wheel-to-wheel action was on the front straight through corner 1 and onto the next straight.  In the end, I made everything from the front straight through to corner 2 3-wide (minus the back half of corner 1).  Then its 2-wide through what is essentially the in-field and then back to 3-wide for the run down to the last corner and onto the front straight.

I find that I always start off sketching out straights that are too long.  My first pencil and paper sketch of the speed circuit track was 94 spaces long when I was targeting 78.  But I'll deal with that in my next step.

My next step is to take my many pieces of paper sketches and create a rough outline of a track on the computer.  This doesn't take me too long because I'm mostly laying out straights and very roughly indicating corner speeds, spaces, and lines.  This is where I often end up having to change straight lengths again in order to make the track fit roughly the shape it should be.  So now I'm look at the relative physical lengths of straights to help me cut down the overly long straights I sketched out based on top speeds and some innate desire to have a 24 space long 3-wide straight on every track.

As it all comes together for the first time, everything gets tweaked a little more -- even corners. 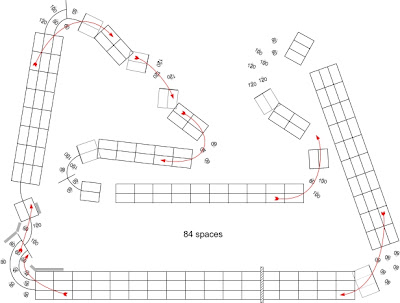 Now I'm ready to race the track for the first time.
Posted by Doug Schulz at 11:56 PM