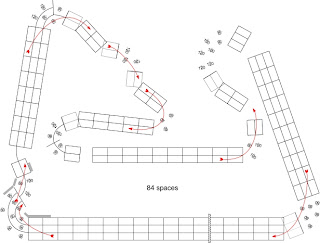 When we last left the development of a Bahrain track I had a first draft of a track (shown to the right here) and was ready to try it out.  This is both the fun part and the part where ideas meet reality.

In order to test the track I build 10 cars based on whatever my current rule set it and run through a race with them on the track.  I try to create three kinds of cars based on three common strategy types: bid-high-race-from-the-front cars, bid-low-race-from-the-back cars, and some form of run-from-the-middle cars.  I do this right on the computer file -- moving car images around the track with blocks of car stats floating around outside the track.  If you have ever participated in my play-by-email races you have a general idea of what that looks like.

As I run through the track, I often make notes right on the track and if I see something I don't like or want to try I'll change it right away so that I can see if I like the change when the cars get back there next lap.  Here's a snap-shot from the end of one of my test races. 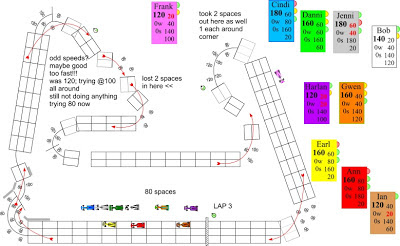 As I'm testing the track, I'm trying to do a couple things at the same time.  I'm making sure the corners work well.  I want the track to have a flow to it that reminds me of the race I just watched.  I want to make sure the straights are the right length -- do cars get up to the speeds I was targeting?  Also, my rough draft started testing at 84 spaces and I'm targeting 78 spaces so I'll be looking for places where I can shave off some spaces. 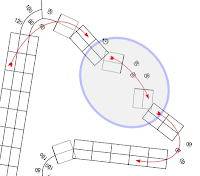 I had a lot of trouble with corner 3.  It started life at 120... with an arrow through the inside lane.  First off, I'm not sure I intended to make the outside and inside lanes 120.  But the bigger problem was that being able to go 140 through that corner on the line, made the corner very silly from a game perspective.  Even though the speeds were more similar to reality.

This brings up what I think is the core balance decisions with these tracks and really any game that strives for some level of simulation: the balance between realism and game play.  Sometimes those two things are at odds and a balance must be struct.  This was a situation where I quickly abandoned the real speeds so that I could get more of the right feel by reducing the speed through that corner.  I tried 100 all around the second lap and still felt it didn't have any affect and tried 80 with the line for the last lap of my first test race. 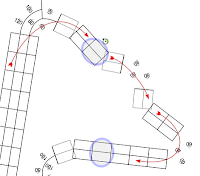 After the first race, I decided that there were two places I could try to take out spaces.  Besides the affect taking out spaces can have on how the track races I also try to make sure that the track still fits together when I am done.  So I took out a space right before corner 3 and right after corner 4.  By taking the spaces out of straights that are effectively on either side of a sharp corner, it shortend up both straights pretty equally.  I then did the same thing later in the track -- taking a space out before corner 7 and after corner 7.  This gets me down to 80 spaces -- which is close enough to 78 for my liking.

This worked out pretty well around corner 7.  The entry into corner 7 was not impacted and I still got a number of cars up to 180 on the straight after corner 7. 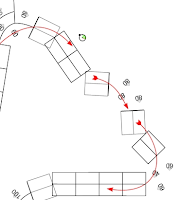 It didn't work as well around corners 3 and 4.  The combination of the slower speeds in corner 3 and one less space between corners 2 and 3 meant that if you ran corner 2 with some wear expense you very often ended up spending more wear in corner 3 as well.  That did not feel like how the real track worked.  Those corners are not really that close to each other.  Also I wanted to make sure that corner 2 was still a good place to make passes and making it even harder to spend wear there doesn't feel like what I wanted.  So I change corner 3 yet again.  I essentially moved the whole corner one space farther away form corner 2 and one space closer to corner 4.  This also meant that I had to do something about the lines for corners 3 and 4.  I ended up truncating the line for corner 3 so that it ended right on the inside 60 space of the corner.


I like the track I ended up with.  It seemed like it should generate some fun racing.  Its got some seriously long straights and a lot of them. 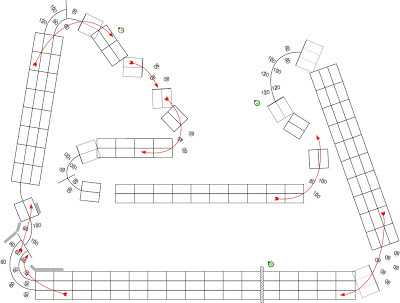 Next I will clean up the presentation of the track before the final step of building its physical form.
Posted by Doug Schulz at 11:07 PM