Apparently when I said I was going to remove some of the racing lines, I meant all of the them.  Lines can be interesting, but it was breaking up the flow of this track -- making it harder to stay with the car next to you through corners.

I also tweaked each the corners I removed lines from.  In the first corner I made the outside lane 120 to match the middle lane -- again giving drivers more options.  In the second corner I made the outside lane 120 -- again making each lane more valid.  I also thinned the track here -- more in keeping with what I think makes sense in this part of the track.  Corners 4 and 5, I made 80 in both the inside and outside lanes.  This still makes the inside lane best, but makes it easier to pass people going through the corner without a line. 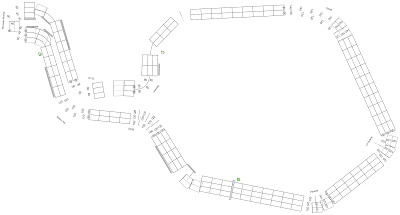 I widened a couple of places.  The two spaces after Samson is now 3 wide to make it easier to run that corner with speed without worrying about the cars in front of you.  Later I also made D132 3-wide -- providing the same benefit in that corner.  I also made the 3-wide part of Gresil extend a space more into the corner.  Now the last row completely lines up so you could switch lanes in that last row, although I doubt that will come up much.

I added a space between the final two corners.  By separating them more I wanted to make it harder for a car without wear to easily run both at the end of a race.  Hopefully also making it easier for a late charging car with wear to make up ground.

But the biggest change was at Nouveau Monde. 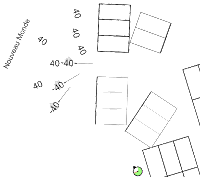 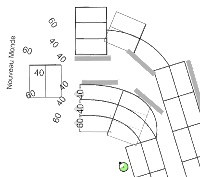 The corner remained 3-wide as did the two rows before and a single row after.  But the corner itself changed.  The entrance is no longer staggered and I the outside lane is now 60 which makes it less then terrible -- not great but not terrible.  The inside is still the best way through the corner, but its now easier to catch people here.

I'm happy with how this track turned out and look forward to seeing it tested in earnest soon.  Now I just need to clean it up and polish it.
Posted by Doug Schulz at 10:55 PM No comments:

After a couple test laps, I decided that a couple of the straights needed to be a little longer.  The first 3-wide straight was 9 spaces.  Making it 10, means that a 200 top can actually use that straight.  I also added 2 spaces between the Paradia corner (last one on the track) and the start / finish line.  I wanted to give more room for the sprint across the finish line at the end of a race.  To balance the track out I added a space to the straight right before Greisel.

I also went in and ended the 3-wide after the first corner onto D938 (this corner does not really have a name but I've borrowed the name of the road it turns onto).  This required some changes to the next corner and the hairpin.

After a couple more text laps with more cars, I've decided that there are some places I want to widen the track in order to make passing easier in certain places.  I may also shorten or remove some lines from some corners.

Well, progress is being made.  I'll update again after more testing.
Posted by Doug Schulz at 9:41 PM No comments:

I am in the process of building 3 older tracks for the Redscape Championship Formula Racing PBeM.  The series participants voted on which historical European tracks they'd like to see.  First up is Rouen.  This French track hosted only 4 Grand Prix between 1957 and 1968 but gained a reputation as a track along the lines of the revered Spa-Francorchamps.

Working on these older tracks involves a lot more guesswork on my part.  I don't have the kind of comprehensive speed trap and corner speed data that I can usually find for modern tracks.  But YouTube has been a god-send.

Here is a great video from 1962 that really helped me figure out what was a corner and what was not a corner and relative speeds for those corners.


Here is a lovely map of the circuit on StatsF1.com (love that site).  As I mentioned above, I am modeling the newer, longer 1957 version of the track.  I'll probably work up the 1952 version at some point, but only 1 Grand Prix was run on that iteration so I'll do it another time.

Here is what I have so far.

I'm roughly 4 spaces short from my initial target.  I'll see as I test if I need to add some spaces somewhere.  I'm also going to have to think about width.  The track is clearly pretty narrow until the road widens coming out of Grésil.  My initial thought of running 3-wide from the start through Nouveau Monde is clearly wrong historically, but the 3rd lane of the 3 involved corners is basically run-off.  As I test with more cars I may thin that out and see what happens.
Posted by Doug Schulz at 8:37 AM No comments:

Sepang has been one of my favorite tracks for Championship Formula racing since I built it.  This year, the F1 track underwent some updates mostly to things that are important in real life but did not functionally change the profile of the track, except in the final hairpin.

Below is a great video that shows what they did and the anticipated changes to the racing line.


Now, I've never had a problem with how the CFR version of this corner worked but this gave me an excuse to re-profile Sepang for CFR and thus the special 2016 version of Sepang is born.  The track is exactly the same as its earlier iteration until the last corner.


The 2016 version of this final corner has only one racing line through the middle lane and a longer effective corner.  The inside lane is normally going to be the worst approach through the corner -- reflecting the new banking inside the corner.  But if you hit that first space you can accelerate coming out of the corner and down off the banking.  The line is the best way through the corner, but sometimes it is better to stay on the gas and use the outside lane that allows for later braking.

The 1999 version of Sepang had two racing lines and a staggered entry that made it advantageous to line up as far inside as you could before the corner.  In many CFR corners it is better to take a longer lane through a corner if you can take it faster because you get to move before slower moving peers (in addition to other benefits).  But this staggered entry meant you could dive inside and be guaranteed to move before faster competition slightly behind you.

I plan to race the 2016 version of Sepang early 2017 at Winter Games Fest in Rockville if you happen to be in the area.