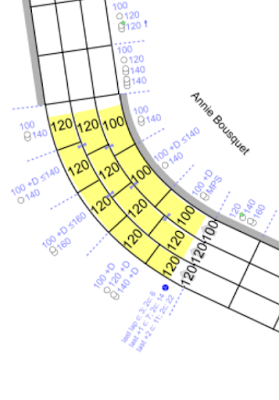 I was developing a version of the Reims race track for Championship Formula Racing when I noticed that one of the corners was named for someone I did not recognize.  Who was Annie Bousquet and why does she have a corner named after her?

It turns out that Annie Bousquet was a race car driver from 1953 until 1956.  And her career would make an excellent movie.

The opening scene could be a hotel lobby bar at a picturesque Italian ski resort (Sestriere in the Italian Alps along the border with France).  We would see two Italian race car drivers regaling an audience with their tales of life at over 200 kph.  One of those drivers is double F1 world champion Alberto Ascari.  In the background Annie listens intently – her recently broken leg propped up on an ottoman.

In addition to being a race car driver, Annie Bousquet was a woman.  In the 1950s women were reportedly more tolerated in Rally racing as it was considered a more casual form of auto racing.  Annie was herself turned away from the 12 hours of Sebring which frowned on women participants.

Annie did manage to enter a number of sports car races, many of which were FIA sanctioned championship events.  She also broke the female lap speed record in 1955 – posting an average speed of 230.5 kph at Linas-Monthery in a Porsche Spider.  The previous record of 215 kph had been set in 1934.

But a mere 4 years after her first organized race, Annie’s racing career would come to an end.  In January of 1956 Annie’s husband died in a car accident.  Annie kept racing.  In June she was entered the 12 hours of Reims but her Porsche was being repaired and was only ready the night before the race and 500 km away from the track.  She drove through the night and insisted on taking the first stint.  She suffered a fatal crash an hour into the race.

The reaction to Annie’s death followed a familiar dichotomy between treating Annie as a driver or as a woman.  On one hand the corner where she died was named after her and a racing award was given her name.  But the governing body for the 24 hours of LeMans banned women – a ban that lasted until the early 1970s -- and the French Automobile Federation currently has no mention of Annie on their web site or the award they named for her.

The race winner reportedly suggested that fatigue played a role in her crash but a number of written accounts of Annie’s life suggest that she was “a victim of her own enthusiasm” or focused a lot of attention on how often she crashed.

I prefer to look at Annie Bousquet as a race car driver of the 1950s.  As such Annie was constantly pushing the limits of an immature sport – very much like every other 1950s race car driver I’ve read about.  Like many others, it sadly turned fatal.  In this case, cutting off a career only 4 years old.