I really enjoy CFR but I was wondering if you would be kind enough to explain forced passes to me? ...


I thought of this later, but in the scenario at the end of that video where the car paid 2 wear and a chance for the corner but was then forced to slow to 140 because the forced pass failed... the Tyrrell can stay at 140 for the rest of the corner but can not accelerate again inside the corner.  Even though it paid for that speed earlier, the fact that the car was forced to late brake inside the corner resets that.
Posted by Doug Schulz at 9:07 AM No comments:

Michael and I got another game of Infinity in recently on my new table.

The story from last mission continued.  This is a custom story I made up.  Part 1 involved investigating the crash site of an illegal shipment of unknown origin.  Part 2 involved breaking up the sale of those goods.  Points were available for investigating any immobile or unconscious or dead member of the deal (more points for the seller than the buyer).  Points were also available for being next to a immobile or unconscious member of the deal at the end of the game or for dragging one back to your deployment zone.  Any of those points not claimed by the end of the game went to player with more points in units still on the table... that person also got some points.

Michael kept his PanO list the same as last time, because he crushed me last time so why not.  One change I gave him was to switch out his Fusilier Paramedic for a Fusilier Forward Observer because Flash Pulse could stun the buyer and seller for investigation. 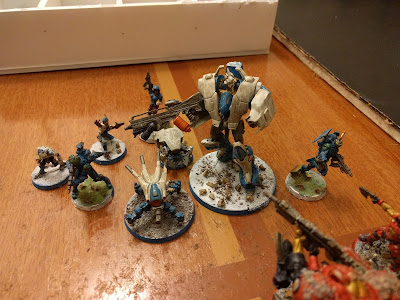 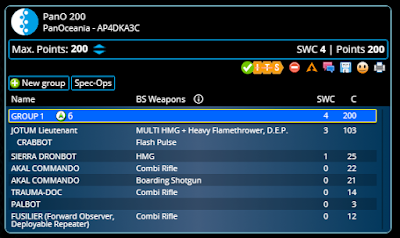 After the beating I took last time out, my list underwent some changes.  Again, we aren't using hacking and some of the other more involved rules.  But that said, I wanted to have as much out there that might be able to dent the Jotum -- Gecko w/ Blitzen, Sin-Eater with MULTI Sniper, Kriza Borac with MULTI Rifle.  Besides being able to play with my new Kriza I added my new Hellcat to the group as part of a plan -- stun the buyer then drop down near him for the search and possible extraction.  Also... I promoted the Alguacil that did something last game to Lieutenant with the intention of keeping her in the back maybe guarding someone's back. 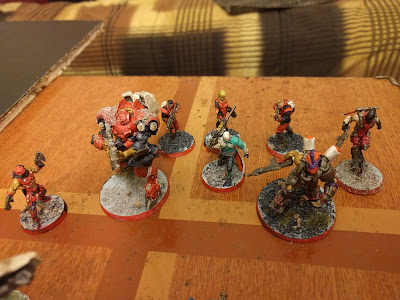 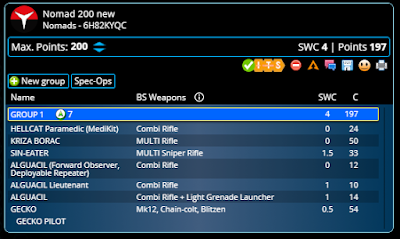 Below, Michael and I take breaks between moves to talk about how it went.

Below is my new-fangled stitching together of video commentary and stills from every turn.

If you want to step through each turn in the race at your pace including the video commentary, see the Google Album.

Links to the rest of the series can be found on the series page.
Posted by Doug Schulz at 8:30 AM No comments: