I know that a lot of you are F1 fans or racing fans in general and specifically fans of racing games, so let me tell you about Motorsport Manager Mobile 2.

As the name suggests, this is not a racing sim.  This about setting up your team.  I admit that this did not sound like the most interesting thing to me but it was pretty well recommended and racing so I gave it a try and have now played it for 40+ hours since downloading it less than a month ago.  It has become my go to iPad game. 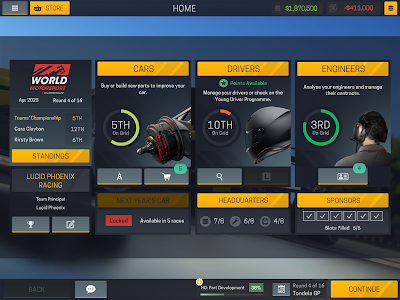 And there are races, but you spend a good bit of time between races tinkering with your cars, managing drivers, hiring engineers, and lining up sponsors.  In line with current F1 rules, your team is composed of two cars and two drivers.

You also have 3 engineers.  Each engineer has a race performance rating that helps you on race day in some obscure way.  They also have a handful of ratings that help you build new parts and design next year's car -- we'll talk about cars later.

Interestingly I've seen engineers get old and their skills will deteriorate -- forcing you to replace them. 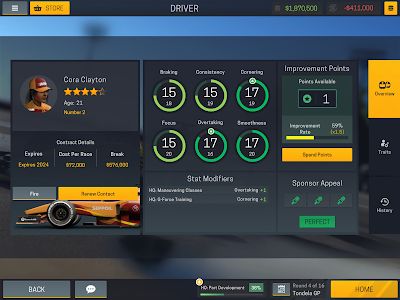 Each driver has 6 different stats with both a current rating and max potential in each.  Every so often you get an extra point to spend increasing a driver's stat closer to their max.  Drivers can also accumulate buffs and debuffs throughout the season.

Drivers can be hired and fired.  You negotiate with drivers so you aren't sure what a driver will cost when start negotiations and you might not be able to afford them after all.  After your first season you can also start a driver development program where talent develops and you can pick one at the end of the year to sign to your roster. 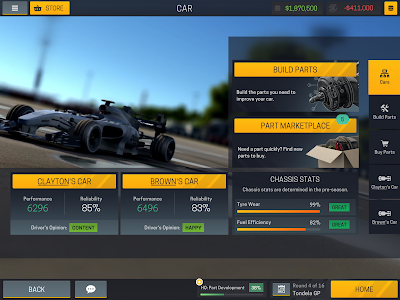 Car development is a big part of the game.  Each car has 6 different components, two or three of which will have an outsized impact on your performance at different tracks.  Each part also has both a performance and a reliability rating.  There is a lot you can do here.  You can swap parts between cars (each car will start similar but slightly different).  You can buy parts in a marketplace -- some of which can be very expensive but can also be a lot better than what you have.  You can build new parts -- usually cheaper than buying new but takes time and the gains can be smaller.

Then, half-way through the season, you start developing next year's car.  That development is improved both by your engineers on staff as well as by dollars invested.

Right, then there are races. 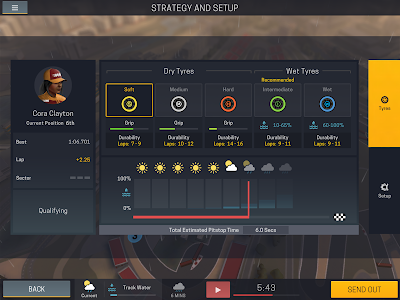 You start with a qualifying period.  Then to the race.  For both you have tire choices, weather, and car set-up.  Above you can see tire selection for a qualifying heat... the track is starting to get wet so I'll probably have to switch to inters and hope I got a good time in earlier or the track dries off for a late attempt.  You can see what weather is coming up to a point so I can plan ahead a little.

Below you can see me setting up the car's aero and gear ratios for qualifying.  On this screen you can also see the track profile which can give you hints as to how to set up your car.  Interestingly, the tracks are clearly modeled after real F1 tracks... usually with slight changes: a different start location and often a slightly different city in the same country to obscure what it is copying. 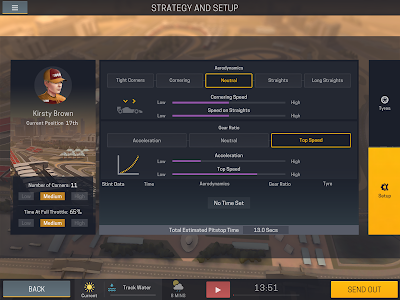 During the race, you will have to manage when to pit for new tires and which tires.  You can also instruct each driver which of 3 engine setting to use right now and whether to push or hold back which has an affect on tire wear as well as performance.  Depending on your car's reliability you may have to spend some time in the pits repairing the car or performance will fall off a cliff.  Sometimes you may have to deal with safety cars or re-fueling.

Depending on which sponsor you brought to the track you can get bonus payments for your qualifying and race performance.  Sponsors can also provide one time and per race cash infusions.  Because all that stuff you did between races cost money.

And I forgot to mention your headquarters where you can spend large money to unlock new abilities or buffs.  Phew.

One reason I like it is that it scratches similar itches as fantasy sports and legacy games.  I used to spend a lot of time on fantasy football but gave that up a couple years ago.  And my league had a lot of legacy elements with player development and cash and draft picks carrying over from year to year to year.  MMM2 is a fantasy/legacy game I can play much more frequently than Pandemic Legacy.

I'm currently wrapping up my 7th season in MMM2.  When you start the game you get a basic car and a couple crap drivers and can't even build most of the car parts -- in fact several are spec anyways.  Year 3 I won that league and got promoted to the next tier.  Some rules had changed (re-fueling, fewer spec parts, more races) but my drivers and sponsors and engineers carried over.  Year 6 my team won that league and I got bumped up to the top league.  No more re-fueling, no spec parts, even more races.  But again, continuity -- both drivers were ones I brought up through driver development programs.

Also, props for diversity.  Plenty of women drivers and engineers.  Plenty of colored skin.  Such an easy thing to do and yet worthy of praise for actually doing it.

Now that I've convinced you, here are three tips.