Ghost Stories, Is It Bad To Be Hard? 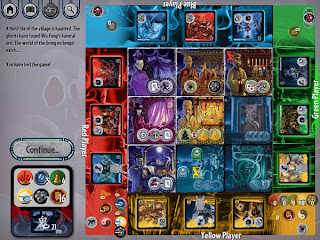 I have a love-hate relationship with Ghost Stories.  On the one hand, its a good game.  On the other hand, IT IS SO HARD.  I bought the game years ago in cardboard and it took me many, many plays to win my first game on the easiest level.  But it doesn't get a lot of plays.

In February, I bought the iPad implementation.  I figured it would be a good game for the iPad.  Its got the draw back / feature of most pure cooperatives: its essentially a solitaire game.  I thought maybe playing it more often would allow me to win some games.  Not so much. 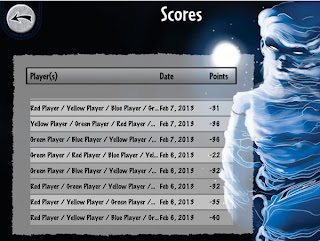 A week or so after I got the game, I won 2 games in 20 attempts, on the easiest level of the game.  I basically gave up after that.  I decided that the game was just too hard.

Then, I read an interview with Ghost Stories' creator, Antoine Bauza, on Little Metal Dog Show.  The interviewer actually asks Mr. Bauza early on why he made Ghost Stories so hard and the answer is basically, yea we didn't want it to be so easy like some other cooperatives.  Then he reached out through the computer and smacked me in the face:

But to tell you the truth, the game is not so hard and when you know it well you cannot lose at all in easy mode and almost never lose in normal or nightmare mode.

So, I went to the internet -- specifically BGG's strategy forum for the game.  Wow.  I was seriously doing this wrong.

Since then, I've won 8 games in 14 tries and I seem to be getting better: 6-2 in my last 8 games.  I may even be ready to move up to whatever level is above beginner.

I think this may say more about me then the game.  I tend to like games that I can jump into quickly with some competence and enjoy.  My last instinct is to research strategies online.  I'm usually the opposite of a min-maxer.  I like my games with flavor more then ideal efficiency engines.

The other thing about Ghost Stories is that it really introduces the concept of "hard" to board games.  Normally, the difficulty of a board game is defined by your opponents, not the game itself.  And here Mr. Bauza is correct, most cooperative/solitaire games are not this hard.

And you know what?  Now that I'm competent (at easy), I'm addicted.  So maybe this hard thing is good.
Posted by Doug Schulz at 8:44 PM