CFR this Sunday at Congress of Gamers

Championship Formula Racing will be making a live appearance at Congress of Gamers, Sunday the 27th at 1:30.  I'll be running a full 3-lap race on a 1/64th scale track.  If you've seen the set-up at WBC, you know the drill.  A final decision on track has not been made.

I also volunteered to run a game of Steampunk Rally (BGG), fresh off the Kickstarter.  I'll start with a demo at 5:00 followed by a race at 5:30.  So stay after CFR and make it a full day of racing games.

Congress of Gamers is a local Rockville, MD con that is a really great value.  If you show up just for Sunday, it will cost you $7 at the door.
Posted by Doug Schulz at 9:45 AM No comments:

I've been unintentionally collecting emails of people interested in Speed Circuit for a while. Now I've got an official email list.

So, if you want periodic emails about Championship Formula Racing play opportunities, PBeM, the forth coming publishing, and/or my other games in development...

http://eepurl.com/bjUAbr
Posted by Doug Schulz at 4:37 PM No comments:

For me, the game of Speed Circuit that I grew up with has become the game of Championship Formula Racing (CFR) to be published by Jolly Rodger Games.  Although I did not know it at the time, that transformation started when I took over GM duties for the Speed Circuit Tournament at what was then Avalon Con many, many years ago (I actually don't remember when).

So while the program at WBC 2015 will say Speed Circuit, for me it will be the first tournament for Championship Formula Racing with what will be the game's final rules set (I promise).

Many, many thanks to Chris Long for being Chief Steward again this year.  I will get up to Lancaster on Thursday and Friday to run the demo and as many qualifying heats as I can but will not be staying through the weekend.

There is only one rules adjustment from last year, which I describe below.  Also note that these core rules are very close to being locked down as the rules set for CFR.  I will also be bringing development versions of some of the components that may end up in that version of the game, including a card-based system for car set-up.

On to the tracks.


Note that some terminology has been rejiggered in this version.  "Test" is the new official name for attempting to exceed your top speed, acceleration, deceleration, or start speed.  Also note that these rules refer to the components that I currently imagine will be in the box for Championship Formula Racing.  Some components will be different in a large format, live event like WBC but I've tried to make the components work at that scale and WBC will be a good test for those.  Also, the tables you are used to seeing are gone and have been replaced by a new thing I built out to make them look less like 1970s era war game combat charts but the underlying math is the same.

Rule Change:
Starting Grids for more than 6 cars (from the core rules)


When there are between 7 and 12 cars in the race the blue spaces are all used and some number of red spaces will also be used, from front to back, as shown by the numbers on the picture below. So in a 9 car field, we would use all of the blue spaces plus the first three red spaces (marked “w/ 7+”, “w/ 8+”, and “w/ 9+”).

The purpose of this layout is to balance out the effect of pole bids regardless of how many cars are in the field.

See the core rules linked above to see how this grid system works with 6 or fewer cars... a thing that rarely happens at WBC.
Posted by Doug Schulz at 8:54 AM 1 comment: 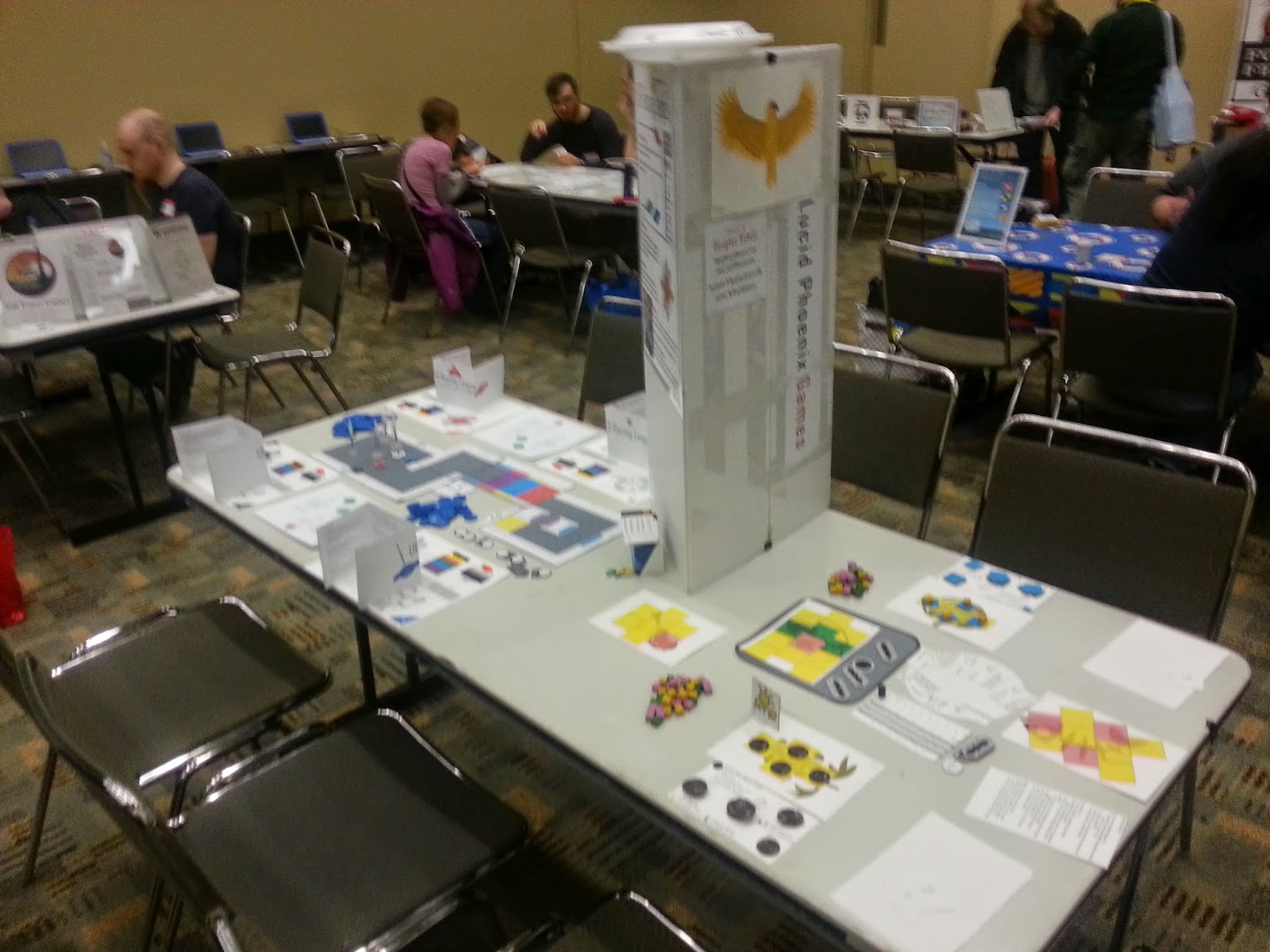 I finally have a first draft of the core rules for Championship Formula Racing.

I'm not sure that this is the right format for the rules.  I am contemplating creating a version that outlines only the core-core rules and pushes exceptions and edge cases off to the back of the rules.  There are a good number of edge cases in this game.

For those familiar with the WBC style rules there will be few surprises.  Perhaps the only two things I added in this draft is a revised grid system that spreads cars out a bit with smaller fields plus I tweaked the tie-breaker roll for pole to allow you to spend skill there as well.

Not a change, but I also came up with a method for using cards to set-up your car at the beginning of the race.  This creates a completely reusable system for car set-up.

If you have any thoughts on this version, either in substance or in clarity, please let me know.
Posted by Doug Schulz at 9:56 PM No comments: