Two CFR Seasons End, Big Changes at the Top of the Rankings

When I posted the last Organized Play update, I mentioned a couple big series that would end soon and have an impact on the rankings.  Well, one of them just ended and another smaller one did as well.

The DC-Maryland-Virginia season got off to a small, 4-race start this year with Chris Brandt organizing.  All races were held in my back-yard of Northern Virginia but my schedule never did permit me to attend one.  Next year I hope.

Chris ended up winning the final race last weekend and was able to take the season victory as well.  That gave him a little boost in the rankings up to 3rd from 6th.

But then the San Marino 2017-2018 season concluded with Gianluca Lari winning the race and securing the season title as well.  The San Marino season was the longest in person season with 9 races and currently is the 2nd most valuable tournament in the rankings.

That gave Lari a huge points boost to propel him from 13th to 2nd!  Unseating Tatum who has been the #2 ranked driver for most of the last couple of years it seems.

Danilo Volpinari ended the San Marino season in 2nd and moved up the OP rankings from 17th to 6th.


Why Did Some Drivers' Point Totals Go Down?

Astute observers of the two charts above will notice that just entering a race and series result for San Marino cost everyone in the top 5 points except Lari.  Why did that happen?

Almost entirely the point loss was due to a change in the points each driver received from placing well in previous tournaments.

All points for the rankings in CFR Organized Play are adjusted based on the competition in a given race or tournament.  The points received from a race against average competition is multiplied by 1 (granting no bonus or penalty).  The points multiplier for an above average race is something greater than 1.  So, if the average race value changes, so does every races' multiplier.

At this point in the season, race multipliers are not moving much.  After 58 races, the 59th is not going to move the needle much.  However, San Marino was the 5th tournament in the rankings.  Which gives it a much bigger impact on the average tournament multiplier.

Oh, and expect this to happen again since Redscape and WBC have historically been graded as above average tournaments.
Posted by Doug Schulz at 8:00 AM No comments:

Another track build from a request.  This time Indianapolis.  Although the oval was officially an F1 track from 1950 through 1960, scoring back then let you drop your worst couple results from your season total which let all the regular F1 drivers safely skip this race with no consequences.

It wasn't until Indianapolis built an infield section that the track held a real F1 grand-prix in 2000.   This new track configuration featured one of the famous banked corners and most the two straights on either end of it.  The rest of the track was a tight, twisting affair before dumping cars back on to the oval.


Not a ton of great video to watch from this track as YouTube is a glut of video about the infamous 2005 race when all but 3 teams withdrew because their tires were imploding under the stress of the banked corner.

I did find corner speeds online.  So, good data to work with there.  Notes (pdf) in hand, I came up with some initial corner ideas (PDF) and started a build. 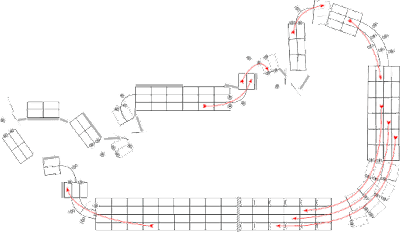 Often when building a new track my first build is close and just needs tweaking and refining.  Not so this time.  I got a lap into a test of the first build above and decided it was terrible.  I was shooting for an infield that was close to 1-line but this attempt gave too few choices to drivers.  I also decided to exaggerate the short straight in the middle of the infield and compress the corner sections on either side of it.

A number of iterations later and I was happier with the final version (PDF). 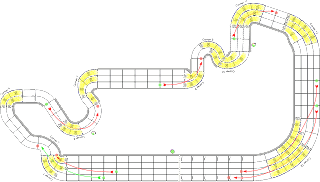 As happened when I built Imola, shrinking up the number of spaces in the in-fields resulted in some creative corners. 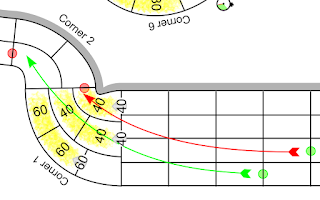 This was the only real good passing opportunity for F1 cars when the track was used by them.  That said, the green line will usually be your best bet.  Although running wide so that you can delay braking before taking the 60s through the corner can work and landing right on the apex on the red line can also be an advantage for next turn sometimes. 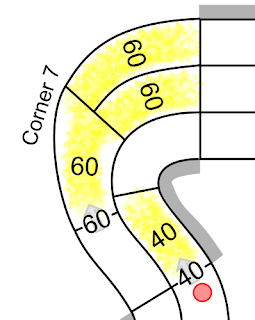 This may be one of the oddest looking corners.  It was not meant to look this odd but the combination of my layout and how I had to twist the track to make it fit and allow cars to fit inside it...

Anyways, this corner is important because there is a short straight right after.  So speed exiting this corner can be important.

It also works closely with the corner immediately before it.  If you are clear of Corner 6, taking the 60s for a faster exit can be best.  But you can often spend the less wear to exit through the 40 space at the cost of a slower exit speed.

I've been building more corners like this based on an interesting insight I read a couple years ago from the driver who used to play the Stig on Top Gear.  It was a discussion of different racing lines through a corner.  While there is a theoretical ideal line through most corners.  Most drivers don't take that line.  They take some variation of it based on competing desires.

Some drivers want to brake later.  This has the advantage of allowing them to maintain speed longer before the corner.  However, they end up having to wait longer before accelerating out of the corner again.  My quick way to model this is to effectively take a speed limited space away from the beginning of the outside lane -- allowing the car to travel faster before having to slow down.

The other option is to brake sooner.  This gives them a slower entry into the corner but lets them get back on the acceleration sooner.  My quick way to model this is to take a speed limited space away from the end of the inside lane -- allowing a car to accelerate out of the corner sooner.

Of course the final, banked corner of the lap needs to be important for this track.

I played with some of the concepts I noted above and with different racing lines.  I ended up tweaking this corner more than any other.  Having 4 lanes for the first time in a CFR build was challenging.  Maybe because I'm not used to trying to develop that many meaningful options. 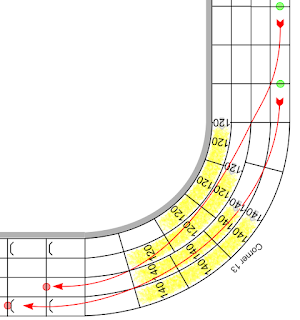 The far inside lane plays off of the early brake / early accel concept.  The next 2 lanes are actually the most efficient.  The 3rd lane is more efficient if you get stuck in the corner but cars with lower top speeds may not be able to take full advantage of that.  The outside lane is sub-par.

Another oddity of this corner is that the two inside lanes have a 120 posted speed limit and are the same number of spaces in length.  The outside lanes both have 140 speeds and the same length.  This is a nod to the fact that it is a banked corner which should narrow the difference in distance traveled between lanes.  But the lines running through the two middle lanes create 4 different options.

Despite the super fast back end of the track, I think this will play out as a pretty tight track that favors running from the front.  However, I would not be surprised if it ends up being a yellow track at the end of the day.

Will its nearest comps end up being Sakhir (PDF) or Barcelona (PDF)?  We will begin to learn that as it gets played.  The track is scheduled to be run during Redscape's next season.