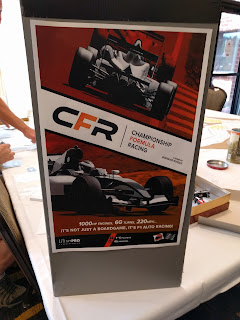 Don Tatum is the only driver to have finished Organized Play in the top 5 all three seasons.  He finished 2nd in 2017 and 4th in 2018.  This year he breaks through to become the 3rd CFR Organized Play Champion.

This was a season Don really ran away with.  Early in the season, it seemed that Tim Baker might give him a run (Tim ended the season 3rd) but by the time we got to WBC, really no one was in striking distance.

Don won 8 races this season (last season's champion Michael Polcen was 2nd with 5).  Don was also the only driver to win 2 events this season.  In the end he finished 50 points clear of runner-up Bruce Rae.  The 2018 season was decided by 6 points.  2017 was decided by 21 points.


Huge congratulations to Don.
Rookie of the Year
Bill Worrell raced for the first time in CFR Organized Play this season and won the Detroit Season including 1 race win and several more podiums.  He finished the season 5th.

There were 42 rookies to Organized Play this season out of the 151 total drivers ranked.  Only two others finished in the top 50: Scott Cornett who ranked 22nd this season and Phillip White who ranked 41st.

Most Improved Driver of the Year
Stephen Peeples participated in a single Organized Play race last season and ranked 125th.  He participated in 6 this season, including 2 wins to rank 40th -- a jump of 85 spots.

Steward of the Year
For the last two yeas, Chris Brandt has run two different events -- the in-person PresCon tournament as well as the local DC-Maryland-Virginia season.  He is the only person to run two events a year and both grew this year.  Thanks Chris!
Posted by Doug Schulz at 9:00 AM 1 comment: