Preparing to Build a New Track for Championship Formula Racing

For years now, I've been on a mission to create a track for Championship Formula Racing (my flavor of the classic 3M Speed Circuit) for every modern F1 track I could.  Hard for me to believe, but I've got 19 1/2 in the bag over the last 6 years (I've got two version of Silver Stone after a revision to the track in 2010).  One of the three tracks in the 2013 F1 calendar that I do NOT have done yet is coming up this weekend -- Bahrain.  This time, I'm going to do my work in public and let everyone ride along on my process.

Its the Friday before F1 races at Bahrain and that's the day I normally do my prep work.  Before I watch the race on Sunday, I want to have a track map with corner speeds, straight-line speeds, and a rough idea of how many corners I think I will end up with and how many spaces long the track will be.

First thing I need is a good track map.  The official F1 site has some good ones.  I'll crop that out and print it as a primary place to make notes on before and during the race. 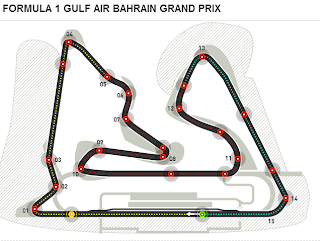 The main thing I want to do before a race is find as much speed related data as possible for different parts of the track.  The two best sources of this information are the official F1 site and the Brembo brakes F1 site.

The official F1 site.  They will give you speeds in many corners and also speeds through a number of speed traps -- usually at the end of the longer straights.  This gives me a lot of good speed numbers from lots of the track.  For Bahrain I get 16 different speeds.  That's more raw information then I get from Brembo but I then supplement with the great data from Brembo.

Brembo provides brakes for many of the F1 teams and after Friday practice, they put all the braking data they get from every partner team together and report out on the braking areas of the track.  Specifically I'm looking at the initial speed (speed before they start braking) and the final speed (slowest speed in the corner).  This data is much better then the official F1 site data because its completely current (the official F1 site data rarely changes from year to year whereas the Brembo data does.  The other nice thing is that Brembo is specifically tracking braking events which is different then just displaying speeds at different points.  Where as the official F1 map claims that Bahrain has 15 corners, Brembo reports that it only has 8 braking events. Now I convert all those speed from KPH to MPH and write them down on my track map.  Between my two sources I've got pretty good coverage on my map.

Next I calculate how many spaces long I think the track should end up.  The way I do that is to divide the length of the track in kilometers by .069.  Bahrain is 5.412 kilometers long so I will be trying to get the game version to about 78 spaces.  This will just be a guide for me, however, not a hard requirement.

Where does .069 come from?  I'm not exactly sure how it started.  Before I did my first track in this style, I did an analysis of the old Avalon Hill tracks looking at trends: average number of corners = 9; average corners speed = 99, average longest straight = 17 spaces, average 3-wide track = 15%; average track length = 72 spaces (for the statistically inclined, the medians were very close to the averages except that the median 3-wide percentage was 0%).  However, there did not seem to be any consistent conversion ratios that I could discern.  So I started out building Catalunya with a target to build tracks that were a little shorter then the old Avalon Hill tracks: closer to 60 spaces and 8 corners then 72 and 9.  Catalunya came in at 60 spaces and 8 corners but -- in hind sight is probably a good bit shorter then it should be.  But after that I had a rough conversion of track length to spaces that I could use as a guide for later tracks.  Early on I used it a very rough guide but now that I'm 20 tracks into this, .069 is the average of the ratios for all 20 tracks I've done so far.


Random fact: based on the current ratio a space in my tracks is 4/100th of a mile or 76 yards long.


Finally, I stare at the track a bit and look at the Brembo data especially and guess at how many and where the corners are for game purposes.  For Bahrain, it looks pretty straight forward. I don't see any reason why Brembo's 8 braking areas can't turn into 8 corners for the track.

Something else I can do prior to the race is watch a video of a lap on the official F1 site in their video section.  Besides, being very fun to watch, this can confirm some things I'm seeing in the data,  For instance, corners 2 and 3 don't get tracked as braking events by Brembo and sure enough Vettel is accelerating through both of those as he exits corner 1.  Corner 6 is very fast but tracked as a braking event by Brembo and yes, Vettel hits the brakes there and doesn't just coast some using the gearing to slow down.  Corners 8 and 9 are essentially one corner -- Vettel brakes before 9 and coasts into 10, not back on the gas till he leaves 10.  Now I thought 12-13 might be like that as well, but Vettel flies through 12 before hitting the brakes in front of 13, so I was wrong there and note on my sheet that 13 is the corner, not 12-13.  And finally its clear that 14 is the final real corner here with 15 being where Vettel begins the acceleration onto the front straight.

Next, I watch the race... well assuming my DVR records the race despite being apparently on its last legs.