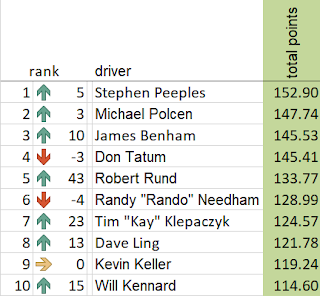 A couple tourneys (mostly mine) ran longer than anticipated this season.  So this is later than usual.  By a month or two really.  But its wrapped and we can crown a champ.

Huge congrats to Stephen.  Stephen won 8 races this season -- the most of anyone and nearly half of the 18 races he participated in.  He also won 2 tournaments -- tied for the most tournament wins.  This season culminated a sharp rise to the top for Mr. Peepels who raced in his first ranked race in the 2018 season.  He was ranked 40th in the 2019 season and 6th last year.

Michael Polcen's top 5 races were slightly more valuable than Stephen's but Michael did not win a tournament this season -- coming in 2nd twice instead -- spoiling his bid for a 2nd title.

Dave Ling placed 8th officially but did win two of the more prestigious tournaments (Redscape's C1 and my P1).  But he won only 2 races all season plus only 2 other podiums to end up with fewer points for his top 5 races than the other drivers around him.

Defending two-time champ Don Tatum came up short of the three-peat but did continue his streak of ranking top 4 in all 5 of the OP seasons so far.

Thomas was ranked 98th last season and jumped up to 30th this season after winning a race and the Hamilton series this year.

Honorable mentions: Robert Rund has been ranked in the 40s for the last 3 season and really put it together this year for 7 wins and a tournament victory to end up 5th on the season.  Mike Greason moved up from 74th to 17th.  Kevin Harrington from 78th to 25th.  Kathryn Harley from 88th to 32nd.  Larry Dygert from 101st to 42nd.  Leon "Blacketo" from 120th to 64th.

I couldn't bring myself to single out one of them.  Curtis and Jeff finished ranked 44th and 45th, less than a point apart.  Curtis participated in 10 races.  He didn't win any but did grab 2 podiums.  Jeff only participated in 4 races and did no better than 5th... except for the race he won.

Steward of the Year: Brian DeWitt

I got a nomination for this award this season.  I don't think I ever have before and honestly should ask for them in the future.  As racing started to occur in person again this year, Brian offered up his house for the DMV series -- hosting double race-days with large scale cars and lunch!  I'm sorry I never made it.  Maybe next year.