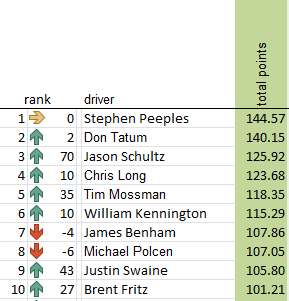 The rest of the top 10 was a mix of regulars and break-throughs.  Michael Polcen runs his streak of top 10 finishes to 5 seasons (1 short of Don's 6 seasons).  Chris Long and Tim Mossman have had multiple top 10 seasons before but Tim was 40th last year and Chris hasn't been top 10 since he finished 3rd in 2018.  James Benham made his first top 10 last year.

Jason Schultz ended the season 20 points behind our champion but in only his second season of organized play.  Will Kennington, Justin Swaine,  and Brent Fitz also made their first appearances in the top 10 this year.

But lets dig into how Stephen beat out Don this year.  Below is a break-out of how each of them got points this year -- their top 5 race results and their top 2 tournament results.  And some general data as well.

That general data tells an interesting story.  Stephen beat Don despite Don winning more races (and even a higher percentage of races) and more tournaments.  But you can also see the first clue here of how Stephen overcame that -- tougher competition.  By design a field rating of 1 should be average (the median race field rating was 0.97 this year).  So we can see that Stephen's average race was considered above average in difficulty of competition while Don's was -- on average -- considered below average.

This doesn't mean that Don was racing against shlubs.  What it really means is that most of Don's wins came against smaller groups of opponents and/or not the very best of competition  Below are the top 11 races, ranked by field rating this year.

As you can see, Stephen won 4 of those races.  Don won 2.  Stephen also had a second place in one of these races.  In fact, those are the five results that add into Stephen's score for the year.  Because the points you get for results in a race are multiplied by the field rating of that race, you can see how Stephen ended up with more points than Don.
To find Don's other wins, we scroll down that list a little.

Don's 3rd best win was against decent competition but not the very best.  A bit further down the table, Don's 4th and 5th (... and 6th) wins were against smaller fields.  Anything less than 8 people is considered a smaller field and will tend to have smaller field ratings.

That last bit is based on my most recent adjustment to the scoring (see this post for some detail on that change).  And yes, this change was made mid-season as I saw more than the usual number of smaller fields seem to really skew results.  I acknowledge that this might be controversial.  But I will have more to say about that in a future post.
For now, lets congratulate Stephen on his #1 ranking and Don for another outstanding season.

Rookies did not show prominently in the rankings this season.  But Chris Manning gets the nod by ranking 68th in his first season, powered by a 2nd place finish in one of the the two races he participated in.  Andrew Koerber was  close runner up at 70th.

Doug Galullo had a down year in 2021.  Having been ranked as high as 2nd in 2018, he fell to 97th last year.  But bounced back this year to 17th.  Much more his usual territory.  Honorable mention to Jason Schultz Who won 6 races this year and jumped from 73rd ranked last season to 3rd this season.

This is probably my favorite award.  Stewards make CFR happen.  Especially organized play.  I try to find new people to highlight every year but in a first... (I think) a repeat for Brian DeWitt.  Brian not only has people nominate him every year... he ran a very impressive 12 races this year.  Often as double-headers.

This season saw a record number of races in organized play at 87 -- 4 more than 2020.  And a larger increase in the number of racing opportunities at 53 -- up from 45 in 2019.  Many tournaments are set up such that you can't race in every race because there are effectively or literally multiple races going on at the same time, the number of racing opportunities is always a bit lower than the total number of races.  The total number of drivers participating in organized play was up from last year to 122 from 104.  But 122 is still down from the 219 high of 151.  Field size shrunk this year from 9.4 to 8.3.  Field size has generally been shrinking over the last 10 years or so.  Although it had held pretty stead around 9.5 drivers per race from 2017 through last year.
Posted by Doug Schulz at 11:00 AM No comments: 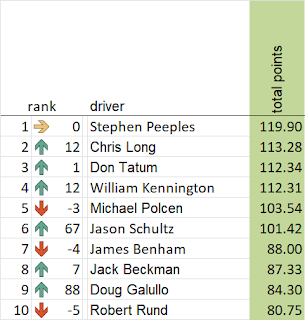 We are well into the 2022 CFR Organized Play season and I've updated the rankings.  Finally.  Thank you for your patience.

Note that these rankings do not account for the 2nd races from my series.  Updates from those races will occur when all results are in.
A note on the aforementioned ranking tweak.  I noticed as I was entering race results that we had a larger then usual number of low player-count races -- 4, 5, 6.  These results seemed to be skewing the rankings so I made a tweak to how I adjust race scores based on the field.  I used to simply use the average ELO of the top 10 drivers in the race.  This was designed specifically to not penalize people for smaller races.
Now, I'm taking the top 8 driver ELOs and dividing by 8.  So if there are fewer than 8 drivers in the race, it will not be worth as many points.  I am happy with this fix but there is another big consequence.  This spread out the value of wins a lot more than in previous seasons.  Most wins were pretty close in value, maybe with a difference of 2-5 points.  Now there is enough spread that there is some overlap in the total points for "bad" wins and "good" 2nd places.
I'm doing the same thing with tournament points now as well.  For tournaments I used to be looking at the average of the top 20 drivers.  Now I'm taking the top 8 divided by 8.  I haven't yet seen any 4 driver tournaments but this does mean that the top heavy tournaments will be worth more.  Which I think makes sense since only the top 3 drivers can get tournament points.  So the 18th best driver in that series is not too important.
Back to this year's rankings.  One result of the bigger point spread for wins is that there is still plenty of opportunity for the top drivers to improve their scores as the season closes out.  A high quality win could be worth 10 points or more to any of the top drivers and the top 4 drivers are all currently within 8 points.
So I'm going to be keeping a close eye on the top series in my PBeM.  Stephen P, Chris L, Don T, Michael P, and James B are all in that series and a race win there is a big win.  Stephen and James are also neck and neck for the series win.  That should set everything up nicely for the last tournament of the season at WBC 2022.
Posted by Doug Schulz at 5:46 PM No comments:

Two years ago WBC steward Chris picked tracks for the WBC CFR tournament.  Now you all will finally get to race those tracks at WBC 2022.

Instead of repeating myself... here's the list of tracks.