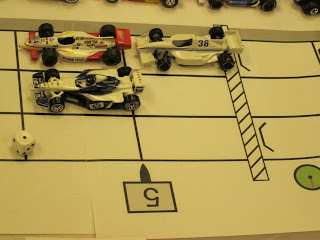 Speed Circuit is one of the earliest games I got into when I was still at home.  I played it frequently with my parents but picked it back up again many years later at then Avalon Con.  For the last 15 years or so, I've been running the tournament there (now WBC).  In fact, the flavor of that game that became associated with me is now officially getting its own name (Championship Formula Racing) and published version in 2015!

I've been doing driver rankings on the sly for a number of years now so that I could seed qualifying races at WBC.  But, a couple things happened that have led to a more public ranking.  I wasn't really trying to keep it a secret and people eventually started peeking at the list and making fun of their friends -- so the data was out there and people were interested.  A couple of other large series started using very WBC-like rule sets with no restriction on who could participate -- so I now figured I should take those results into account and so a new ranking is born.

Lets skip to the end.

That number on the left -- the score -- is the main factor.  Everything else is a data dump and tie-breakers. What makes up that score?  In short: race results from WBC-like series; from the last 3 years; scaled and normalized based on the series they occurred in; per event participated in.

From the last 3 years.  What I really mean here is the last 3 instances of each of the approved series/tournaments.  The WBC PBeM has only occurred once (although iteration two is just beginning) and my personal PBeM just started using WBC-like rules last iteration, so the current scores include any results from the last 3 WBC events plus the only WBC PBeM, and the most recent of my PBeM.

Scaled and normalized based on the series they occurred in.  This is where the math is.  Of the three series I'm looking at, two are very similar in structure and the third is very different so I deal with the two types differently.

My PBeM is run as a series of 3 races with points given out for race finishes.  After the three races, the driver with the most points wins.  This is actually pretty easy to deal with.  In order to normalize points, I re-scale points given out in the series so that first place is worth 100 points.  There is one complication in that the series is broken down into tiers, so that the best drivers from the last season race against each other, then the next tier, etc.  In the series, lower tiers are given less points for race results, so that scales easily enough, but I also end up discounting race wins in lower series for the purpose of this ranking.  For instance, Grant Guillard won a couple races last season but he did it in the second tier and so his entry in the PDF shows his best finish as a 2nd.  The end result is that most race finish positions are worth some number of points in this series.

The other two series -- the WBC based ones -- are run as elimination tournaments where a series of 2 or 3 qualifying races are run and the best finishes from those races get to participate in a winner takes all final race.  The ultimate goal is to win that final race, in the qualifying races it is most important to finish well enough to get to the finals.  Otherwise, a 4th is just as good as crashing if neither gets you to the finals.  However, a first is marginally better then a second because there are some advantages garnered for the finals.  For these series, qualifying race results are discounted by at least half.  So a race win in qualifying would not be worth more then 50 points.  In qualifying, only the top four finishes gain you any points at all.  This is because, no one has ever qualifying for the finals based on anything worse then a 3rd place finish.  Fourth place is getting some points, because there are rare times at WBC when a 4th will get into the finals as an alternate.  While there are multiple qualifying races in these series, only a driver's best performance gains them full points.  Second or third best results are discounted even further because their impact is even less.  For the finals race, I used WBC's laurels as a way to scale final result points.  So points go all the way down to sixth in the finals.

Since each series has a different number of races and/or scoring systems, the total points in play are different for all three.  So after adding points up for each series, I normalize against an event maximum of 100 points.  So, if someone were to win every race they could possibly enter in an event, they would get 100 points.

There is one tweak to this averaging.  If a driver only has one event being scored, I halve their score.  Only two and I deduct 25%.  One example of this is Turyko Suky.  He participated in the WBC PBeM but that was his only scored event for this ranking.  He did reasonably well in that event: winning one qualifying race, finishing 7th in another, and finishing 5th in the finals of the WBC PBeM.  For that he got 40 points.  Unmodified, that would have put him 4th -- in front of the last three WBC champions, who also happened to participate in at least 2 other scored events.

Obviously, there is more detail to the maths, but I didn't want to spend too much time on this.  Feel free to ask detailed questions and I will be happy to answer.  I plan to update these rankings every time one of the scored series is completed and also immediately before each WBC.  If you are aware of a series or event that you believe is WBC-like in its rules set and open to all participants, let me know so I can try to include it in future rankings.
Posted by Doug Schulz at 3:43 PM