Initially I organized these by gut, but pretty quickly applied some track profile metrics to determining what would end up being better for each strategy.  However, the ideal would be to use actual results from actual races.  I've now got data from 36 races on these tracks that helps me to do that and so I've redone some calculations and reorganized the tracks.

I then figured out how many points each position on the starting grid produced per race.  I also figured out how many points each start speed group produced per car.  I wasn't ignoring the middle groups and I think that is a viable 3rd strategic group but I did not want a 3-way variable... maybe next time.  But I did subtract the points scored by middle groups from the other numbers I calculated to provide some relationship to those middle strategies.  I use the point system from Organized Play.

Looking at the scores for Monte Carlo we can see that both the Front and Back groups are negative.  This means that the middle 2 rows actually did best.  But the front two rows did better than the back two rows.  Interestingly, the next two numbers show that 60 start speeds did worst.  20 start speeds (slow) having done a little better than 100+ start speeds (fast).

Finally, I show how many races I had at least some data I could use for these performance numbers.  Note that for many in-person races I might have only final results and so no data was helpful.  More often I would have only grid position and not start speeds.  For instance, the two races I have for Sao Paulo did not include start speeds which is why both Fast and Slow are 0s.

How Are Tracks Grouped

In that big table on the right, I show the scored produced by formulas I apply to different data.  For the in-between tracks I blend the track score and results scores together based on how close to 10 races my sample is.

To create the groups I look at the scores.  If a score is a standard deviation or more above or below the mean it ends up in the Red or Purple groups.  Yellow tracks tend to be meaningfully pro running from the front.  Green tracks should be pretty even but the reality is that are often still a little pro running from the front.  Blue tracks tend to actually be more balanced looking.

Race from the Front Bias

It has long been debated that CFR has a race from the front bias.  The data I've collected here does nothing to disprove that.  It is a game balance point that has long been on the radar.  The average results score (not shown below) of all tracks for which I have data is -1.73.  Roughly that means that some combination of starting in the front 2 rows and/or having a 100 start speed should be worth almost 2 points in any given race.

Now I'm going to look at some specific tracks that changed groups from my last groupings. 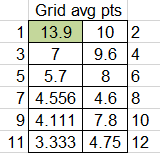 Lets start with a doozey.  Francorchamps looks like a race from the back, is still the longest track I've built, and was grouped as a blue last time around.  But I have 10 races I can pull data from for this track and the results say different.

The chart to the right shows a starting grid and the average points that each spot has generated over those 10 races.  Note that due to field size not all grid spots have 10 samples in them.

The pole position is highlighted because a value of 11 or more means that the average result from this spot is a podium finish.

Why are the results different than expected?  My guess would be corner 1.  It really spreads out the field early and gives the cars that get through it on turn 2 a turn or so lead on the back half of the field.

Funny track.  When I built it I was convinced that this would be a deceptive red -- a track that looked like a play from the back but had too many choke points.  Twelve races later it turns out you can run it from behind sometimes.  But the front is still better on average.  So it moved from Red to Yellow.

The grey, na fields indicate that the 10th and 11th spots on the grid were never filed.  All of the data here was from my PBeM that caps at 10 cars.

Sakhir and Suzuka
Both of these tracks look more balanced on paper but so far they have both performed more front-leaning.  With only 4 or 5 races in the books on each with the data I need, they have moved from Green to Yellow although Sakhir could end up in red if trend continue.  Suzuka might end up in yellow.  Suzuka is very narrow and this result jives with my experiences on that track.  Sakhir surprises me.

Hockheim and Istanbul
Both look like race from the back tracks.  However, I have had thoughts that neither really were before.  And my track profile metrics peg them as greenish.  Honestly, I think I may have let perception blind me a bit when I made Hockenheim purple and Istanbul yellow last time around.


The 2nd column in those tables is the average points with different start speeds (100 or 120 = fast, 20 = slow).  The 3rd column is my sample size.  So some of Istanbul's weirdness could be sample size related.

Austin and Valencia
I am convinced that Valencia is a run from the back track.  But the results so far suggest that it is more balanced than that.  Austin has been pegged by some as a run from the back as well but results are also suggesting better balance.  So they moved from Purple to Blue.  Austin could end up Green eventually.

Oyama and Sochi
I don't have data (yet) for either but they both moved because I had placed both where I thought they were going to end up after racing despite what the track metrics may say.

Oyama looks so fast but it is also very short so it scores lower on the track profile scoring and moves from Purple to Blue.  Sochi has some choke points on it that I am not sure that the track metrics pick up on, however I've moved it from Blue to Purple for now until I can get more data on it.
Posted by Doug Schulz at 9:00 AM