With Redscape Season 3 in the Books an Organized Play Update 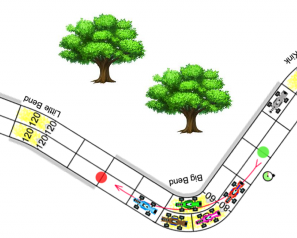 The last couple turns of the last race of C1 in Redscape's PBeM turned out to be very, very important.

On the right is turn 28.  I'm in the blue car leading the field.  I've got 4 wear left and the win is not really in doubt.

Fabio is in the Brown car currently in 3rd.  Fabio came into this race with more points on the season and can win the season if he finishes 2nd.  He has a single wear left.

The green car inside Fabio is Tim.  Tim is not in contention for the Redscape Season 3 championship.  Tim is also out of wear so unlikely to hold Fabio off.

I had a decision to make for turn 29.  Do I secure the victory by going 140 to the line for the last corner (just out of view above).  Or slow to 100, letting Tim probably line up beside me, and blocking off Fabio if I catch him off guard.  The risk is that if Fabio decides to spend his wear now, I'll be passed and lose the race as well as the series championship. 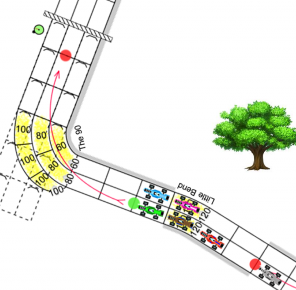 I took the risk and slowed.  Results on the right.

As you can see, the gamble paid off.  Both Tim and Fabio planned for 120 this turn.  Tim went first from the inside lane and took the spot, forcing Fabio to late brake.

Next turn I crossed the finish line.  Tim takes the line at 80 which forces Fabio into the 80s for his last wear... still behind Tim.  Giovanni got a slip from me and ended up passing Fabio.  It was then pretty much impossible for Fabio to regain 2nd.

It is possible that Fabio may have thrown things at me.  At least rhetorically.

But the end result was that I got my second race win in what has, so far, been the most competitive series in this season of Organized Play as well as the Redscape season 3 championship.  That netted me a ton of points and catapults me to the current OP season lead. 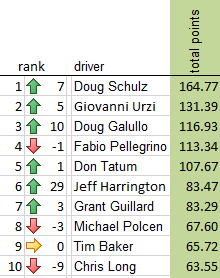 Current top 10 on the right.  Quick reminder that the rank changes are as compared to last season not the previous update from earlier this season.

Giovanni ended up 2nd in Redscape's last C1 race and 2nd on the season and that pushed him up to 2nd in this Organized Play season.   Fabio's 3rd place finish on the Redscape season pushed him from 6th to 4th in organized play.  Doug G and Don were not in the top series this Redscape season and so dropped some as other drivers picked up points around them.


There will be some other races before WBC, but probably nothing with the potential to net someone a lot of points.

Looking at where the top cars sit in the standings currently, it looks to me like Doug G is the driver with the potential to knock me out of the top spot.  With a win in qualifying and a win in the finals, Doug could pick up 63 points and jump back up to the OP season lead.  But if attendance is up or down from last year, that can change everything.
Posted by Doug Schulz at 12:30 PM