On to race 4 of my 10 race solo season this year.  Race 3 was Monza which started in this blog post.  Jackie Stewart really consolidated his lead after Monza in the series championship, can anyone make up ground on him this race?

Oyama is a very short track with few corners and high speeds.  And I will only be doing 2 laps here.  This should go quick.  In fact, I was planning to show this entire race on video but my phone stopped recording after 30 minutes.  I was not sure why, so I reverted to the photo-blog approach.  Turns out this is just how the phone is.

So set-up and first 2 turns are in the video below.  Turns 3 through the end of the race follow in picture format.  Since this was a short race, I actually took a picture after every turn post video fail.

Turn 3:
In In turn 2 I got stuck in the corner and Hunt got stuck as well.  Hunt (in the white car) wastes another space in this faux corner with me in the way... again. 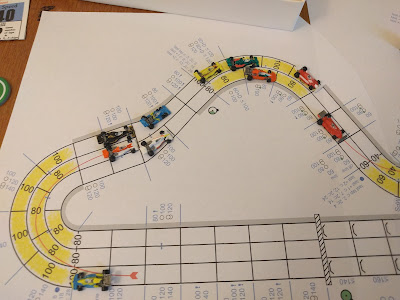 Turn 4:
Fangio leads the field into the 2nd third of the race.  Yes this track is that short.  Vettel is only a couple spaces back.  Jackie Stewart (orange car) is stuck in the corner behind Vettel as the field squeezes together through this tight infield section. 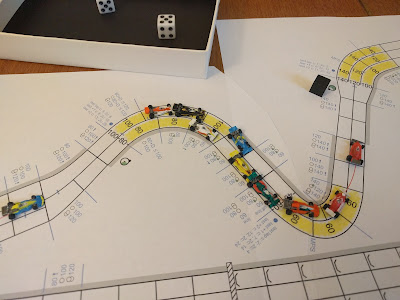 Turn 5:
Alonso in the yellow car stuffed me again.  I thought about late braking to take the line for less wear but have wear to burn and did not want to risk the brakes damage.  So I end up behind Alonso hoping for a slip and that gives Hunt room to take the line underneath me.

Up front Vettel spends 2 wear to catch up to Fangio. 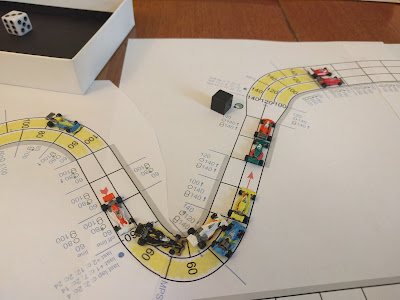 Turn 6:
Fangio and Vettel enter the massive final corner of lap 1 side by side. My play last turn does not help as Alonso does not give me a slip and hunt beats me to the 120 lane and I end up stuck in another corner. 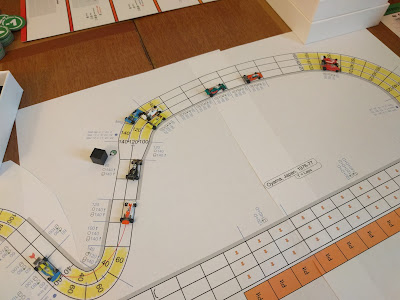 Turn 7:
You can see below how things really spread out again.  It feels like lap 1 has been a bad one for me so far.  But Jackie Stewart, despite being 3rd right now, has only 1 wear left after bidding 5 at the start.  Raikkonen has still not spent a wear.  Does he have time to make up ground? 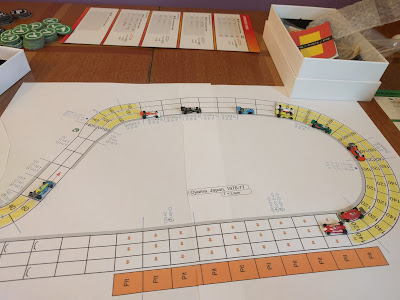 Turn 8:
Vettel pushed his top speed last turn to pip Fangio through the corner and then did it again this turn to extend his lead.  But now he's out of green skill.  I end up wide in the last corner with a slight log-jam in the inside lane. 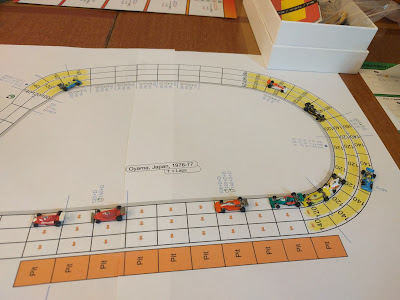 Turn 9:
Top speed starts to matter. Vettel rolls dice to extend his lead. Stewart gets to 180 to close on Fangio. Alonso passes Rindt (in the green car) by pushing to 180 as well. I pull even with Hunt as I gun it while exiting the corner. 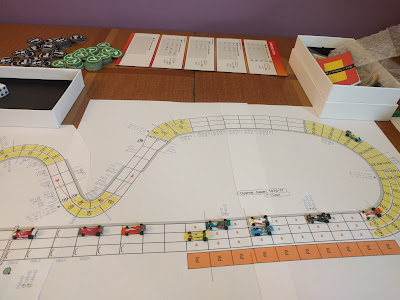 Turn 10:
Jackie Stewart now has his orange car right on Fangio's bumper.  Rindt is now a couple space behind Alonso and I pull even with him after passing Hunt. 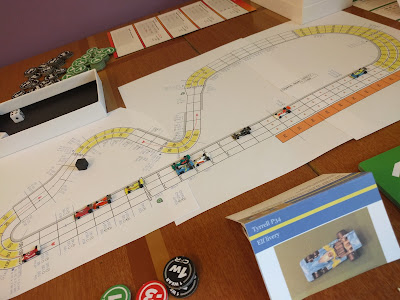 Turn 11:
I swing wide to give me a the line heading into the first corner of lap 2.  Hunt gets 2 slips from me and dives inside. 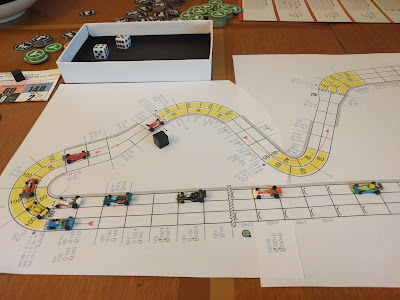 Turn 12:
Most of the field is now in the last third of their races. Alonso flies out of the first corner into the second corner, past Jackie Stewart, and into 3rd. I pull even with Stewart. 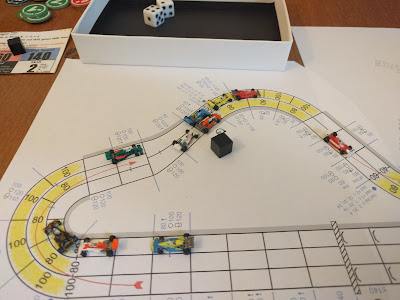 Turn 13:
Alonso dives inside Fangio. Rindt catches up to Hunt behind Stewart and I. 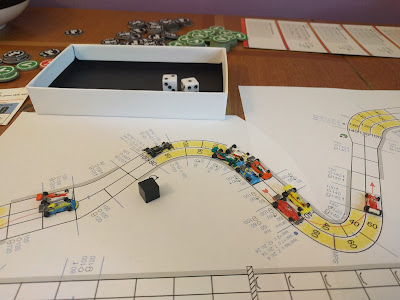 Turn 14:
The field tightens again. I late braked to make sure I beat Jackie to the corner and pass him for 4th.  Alonso is not able to stay in front of Fangio with Fangio on the line.  Both are only a couple spaces in front of me but Vettel looks to have the race in hand. 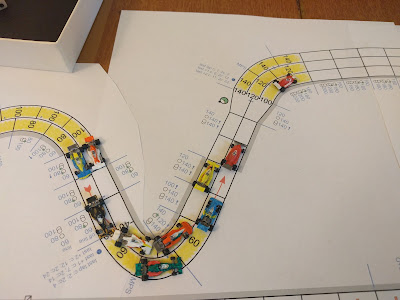 Turn 15:
Fangio and Alonso spend 2 wear each to gain some ground on Vettel.  I'm saving my wear for the last corner. 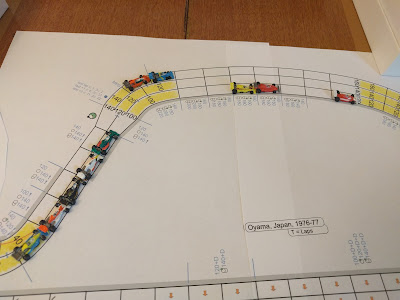 Turn 16:
Fangio and Alonso underspent in the last corner and will finish with wear on their tires. I spend my last 2 wear to pull ahead of Jackie Stewart and the field.  I'm hoping for my top speed to win the day in the last couple of turns. 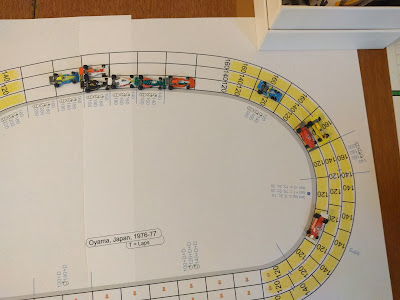 Turn 17:
I come out of the corner right behind Fangio and Alonso and decide to tuck in behind Alonso who could go 180 next turn. 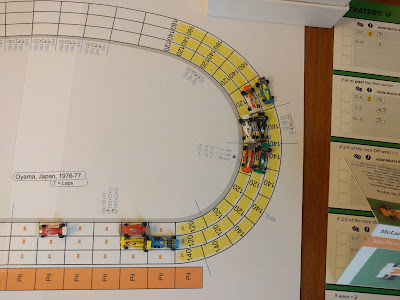 Turn 18:
That worked out.  Alonso goes 180 and passes Fangio.  I get the double slip from Alonso to pass both of them and now I'm only a space behind Vettel!  The entire rest of the field is now stuffed into 3 rows just out of the last corner.  Raikkonen, who has spent his entire race in the back, sits 9th behind Hunt on the outside rail, hoping for some slips. 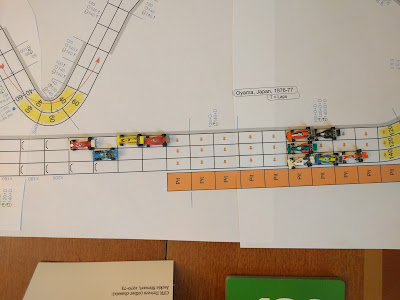 Raikkonen gets the double slip from Hunt to go from 9th to 5th and push Stewart down to 6th. 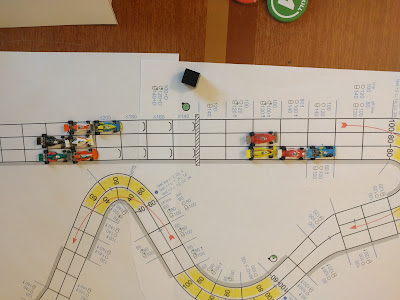 Turn 20:
Only 2 rolls were failed all race.  My start speed push at the start and now Mansell in the black car failing a roll at the end here.  Interestingly, neither really mattered as I ended up with the win and Mansell would have ended up 10th either way.

Fittipaldi gets a slip from Raikkonen to end up 6th.  That puts Jackie Stewart 7th. 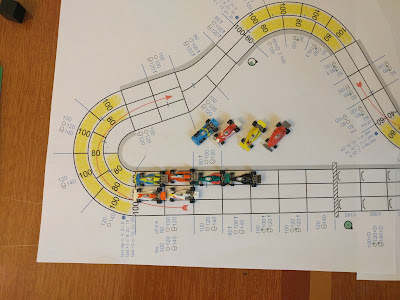 Jackie Stewart finally seems human although retains his lead in the standings.  Vettel and I gain a lot of ground on him though.
Posted by Doug Schulz at 9:46 AM