The last lap in this 4-lap chase around Monza -- leg 3 of my solo season -- and I'm back in 7th but only a turn or a little more behind 2nd place. 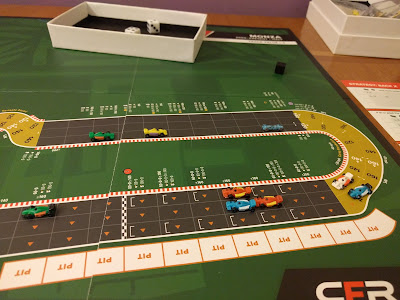 Above you can see that 2nd place right now is a fight between Alonso (in red), Raikkonen (in blue), and Vettel (also in red but behind Raikkonen).  Raikkonen only has 4 wear but the much bigger top speed.  Alonso has 7 wear.  Vettel has 11 wear.

Jackie Stewart is still not threatened but will have to nurse his damaged 140 top speed for this lap.  He has 4 wear left.

The very next turn, Alonso gives up second after damaging his top speed. 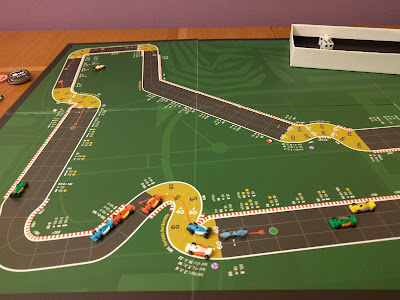 A couple turns later, in the above picture, Raikkonen remains in second through corner 1.  Meanwhile, I gained some ground on Fangio and Hunt who are right in front of me because neither spent enough wear to clear corner 1.  I end up passing Hunt the very next turn. 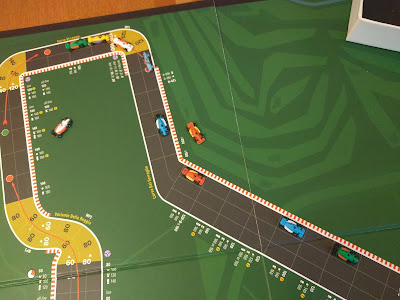 There is little action after that as the cars weave through the next 3 corners.  Then Raikkonen uses his top speed advantage down the back straight to close in on Stewart up front.  Alonso fails his second top speed test of the lap and has to retire from 3rd.  Fangio damages his engine on a top speed roll as well.

Fangio ends up failing another top speed test the very next turn to pull over next to Alonso as the 3rd retirement of the race -- all engine failures. 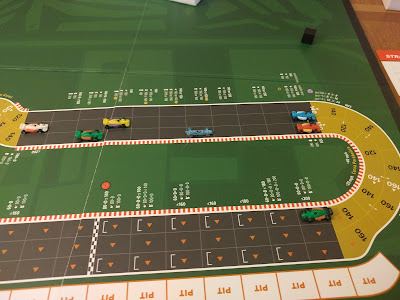 As you can see above, Raikkonen's pressure on Stewart ends up being short lived as he could not clear Ascari without any wear and ends up having Vettel close up on him.  I'm in 4th mostly because of Alonso and Fangio's retirements.

Fittipaldi passed both Hunt and Rindt in the back a turn before the picture above, but Rindt used wear and a slip to pass back through Ascari.

Stewart is clearly on his way to a 2nd consecutive race win. 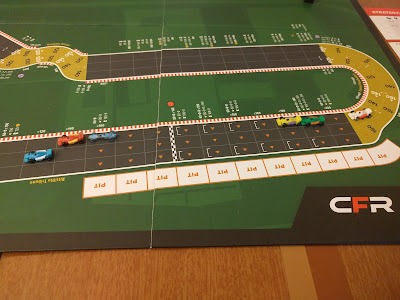 Vettel exits the final corner of the race inside Raikkonen and pushes his top speed across the line.  But Raikkonon also pushes and just calims 2nd.  I was a little too far back and end up in 4th still.

Rindt, Fittipaldi, and Hunt end up in 5th, 6th, and 7th -- the same order you see them above having just cleared the final corner. 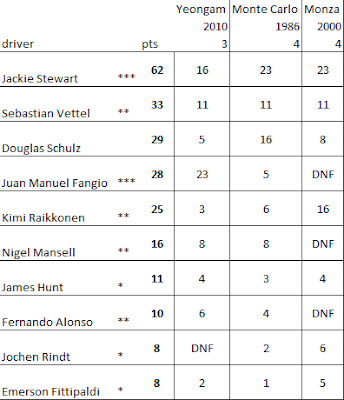 Season Update
Jackie Stewart really consolidated his series lead in this race.  He has nearly twice as many points as 2nd place Vettel.  Vettel jumped up to 2nd with his 3rd consecutive 3rd place finish.

Fangio's DNF dropped him only 1 point below me.  While Raikkonen's 2nd place jumped him up 2 spots to 5th.

Next Race
The next race will be a 2-lap affair at Oyama -- perhaps the fastest and shortest track I've made.  Will this be another good track for Raikkonen or will the race be too short for his race-from-behind strategy?
Posted by Doug Schulz at 8:00 AM