Lap 2, continued:
At the end of part 1 of this 3 part play report, I had slipped through the pack into a decent position.  The next turn put me 3-wide with Fangio and Alonso.  I was not on the inside, so I went faster than I should have and late braked using a wear to beat them to the line outside corner 2.

That allowed me to beat the pack through that line and into the thin section of track through the Lesmo corners as you can see below.  I'm in the old blue car.  Jackie Stewart is still leading way off in the distance.  Vettel still has a stranglehold on 2nd. 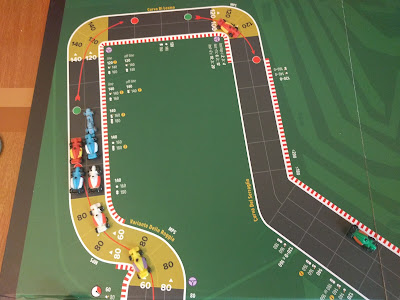 On a design tangent -- this is sometimes a blind spot for the Historical Drivers.  The instructions on the side of the track do not usually provide the opportunity to late brake in order to take a line before the corner with the "!".  Those exclamation points are almost always reserved for situations where the HD would enter the upcoming corner.

Nothing too exciting would happen until the pack approached the Variante Ascari when Alonso got a slip and ducked inside Raikkonen and I right before the corner then spent 2 wear powering through to take 3rd.

The next turn he pushed his top to 180 and I ended up with the double slip to even with him inside the Parabolica, pictured below.  I'm the old blue car next to Alonso's red car.  Stewart and Vettel are still a turn and 2 turns ahead of us, starting lap 3. This photo is actually not accurate.  After I took the shot I decided that Raikkonen would take 2 slips into the corner for 2 wear to end up right behind me. 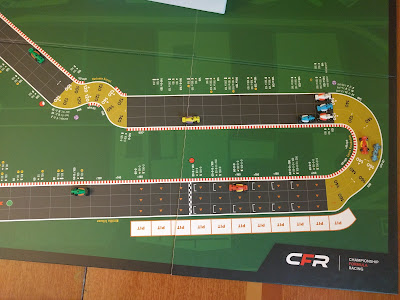 Lap 3:
The very next turn, Mansell pushes his top speed through the Parabolica and fails... damaging his top speed down to 120.  This is the first damage of the race, but I don't think it will be the last as we are only half way through.

A couple turns later most of us are through the 1st corner of lap 3.  Last turn, Alonso (the red car in 3rd in the above picture) created a gap to Raikkonen and I by beating us to the first corner and late braking -- trapping both of us in the corner and allowing the pack to catch up. 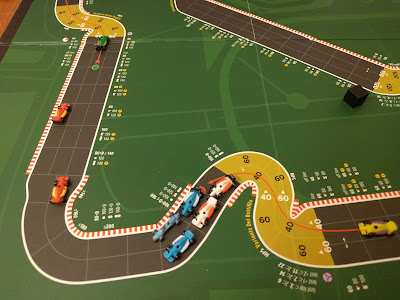 In the image below, a couple more turns have lapsed.  Alonso caught up to Vettel before the 2nd corner and then spent more wear to pull inside.  Raikkonen (in the blue car in 4th) got the jump on everyone heading into that same corner but damaged his brakes late braking.  I took a slip into the corner. 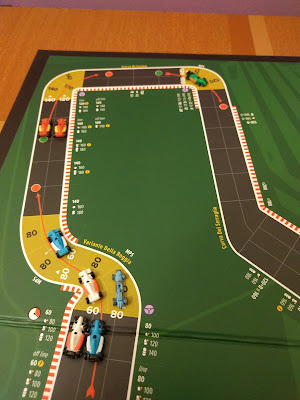 The image below is one turn later.  Jackie Stewart damages his top speed coming down the straight.  Will that hurt his chance for the win?  Alonso beat Vettel through Lesmo to take over 2nd.  Raikkonen gains more ground on the leaders.  Lots of cars pass me through corner 2. 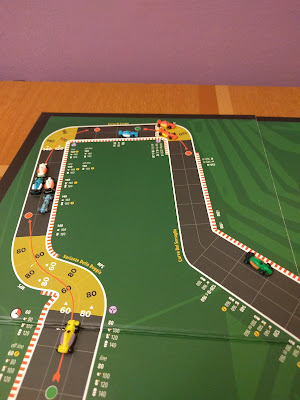 The turn after this, Stewart hits the 2nd stop-watch of Lap 3 and the final third of the race is underway.  But not before Nigel Mansell fails his second top speed test, blows the engine, and is our first retirement.
Posted by Doug Schulz at 8:00 AM