Race 3 sees my Solo Championship Formula Racing series head from Monte Carlo to Monza for a 4 lap race.  I've replaced most of my components with ones from the actual production game box.  Note that I'm working with 2 boxes worth of material here.  Mostly this means I have 2 of each strategy card.

I decided to build a middle-play car that could real the leaders in with a 180 top speed.  I think I only need a 40 accel because of the fast speeds you have coming out of corners before the big straights but a 60 decel to help slow down before corner 1 in particular.  I went with a 60 start so I did not spend the first 2-3 turns just getting up to speed.  2x laps in skill and 7x laps in wear round out the car.  There are not enough corners here to justify 8 wear in my book. 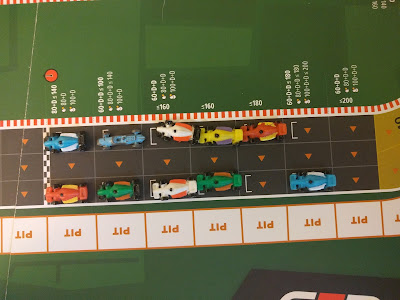 Here is the track after pole bid was completed.  (Note that I switched to the old blue car because the brown one I used last race did not show up well against the black asphalt.)  I bid 7 (all but 1 of my skill) and ended up 3rd... I was a pip away from being tied with Vettel.  Fangio got pole with a bid of 9.5.  Jackie Stewart got the best value with 4th after bidding only 3.5.  Stewart than flipped his strategy card from his original idea of Back Standard to Front A.  The rest of the field bid from 0 to 2.5. 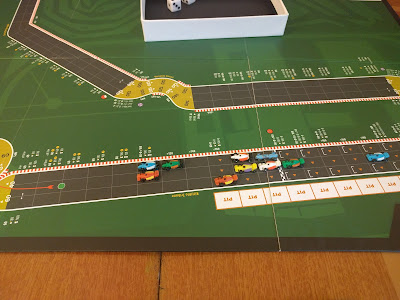 Bad start for me.  I pushed my start speed, used 1 skill and rolled an 11 which means I mis-shifted down to 40!  You can see the hoards rush past me as Fangio (blue), Vettel (red), and Stewart (green) race off into the distance.

Alonso in the other red car went from 9th to 4th here. 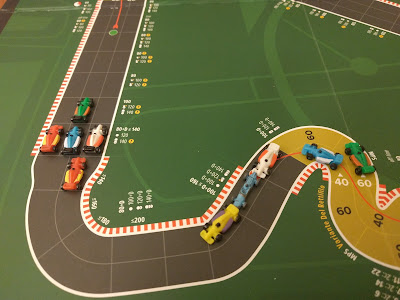 Stewart takes the lead exiting corner 1 (above) by pushing accel and top to get to 180 and leap frogs Vettel (1st red car) and Fangio (1st blue car) into first. 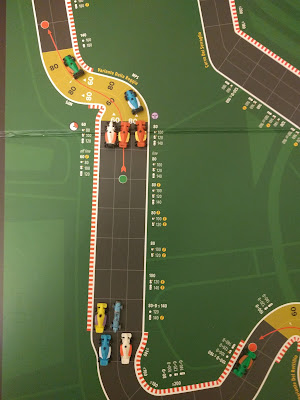 Stewart continues to press from the front and spends two wear plus a naked chance in corner 2!  He makes it.  Fangio moves into 2nd by taking the slip from Stewart into the corner. 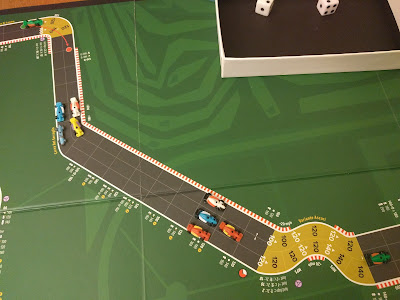 Three of the first 5 cars on track right now have a 140 top speed.  Stewart already took advantage of his top speed to take the lead earlier this lap.  Now it's Alonso's turn after he too pushes his accel and top to go 180 and into 2nd.

Two turns later, Vettel got two slips from Alonso when Alonso pushed to 180.  After running the Parabolica even, Vettel pulled ahead heading into corner 1 of lap 2 making use of his higher decel and desire to spend more wear in that corner. 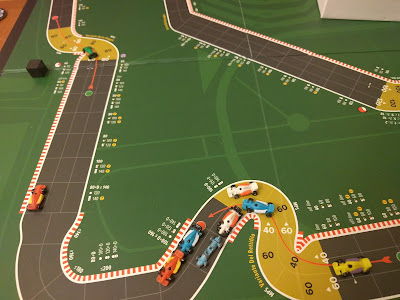 Above we see the payoff for Vettel (in red) as he has a gap now between him and the rest of the pack.  And we can barely see Stewart (green) off in the distance having completed his first third of the race.
This was an interesting turn through the first corner for the pack.  Fangio, Mansell (1st white car), and Hunt (2nd white car) started this turn 3-wide in front of the corner: Fangio on the line and Hunt outside.  I (old speed circuit car) was on the line behind Fangio and feared I was going to be blocked but plotted 100 to leave options open and to delay the brakes test if I had to.  Lucky for me the seas parted and I got through for 2 wear, passed two cars and pulled up next to Fangio.

Raikkonen (second blue car) is in a good position given that he is running a back of the pack strategy.

It will be interesting to see if the 140 top speed cars can keep up.  Vettel has a stack of green skill he can use but the rest could be in trouble on this track.  It will also be interesting to see how many damaged engines and related DNFs occur after the historical drivers run out of their green skill and still feel the need to push the engines.
Posted by Doug Schulz at 8:00 AM