The What-If Champion of 2015 for Championship Formula Racing 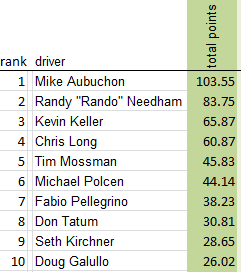 Last month I told the tale of how Chris Long would have won the first ever CFR Organized Play championship, if that had been a thing in 2016.  In comic book parlance 2016 was like season 0.  Now we'll talk about how Mike Aubuchon won season -1 and how Randy Needham became the bridesmaid of CFR.


2015 was a bit of a down year for CFR.  My PBeM was running again but I was struggling with its growth and it would not finish until the 2016 season.  So the 2015 season consisted of 7 races spread over two tournaments: WBC and Redscape's inaugural season.

Michael Polcen won that 1st season of Redscape with a 1st, 2nd, and 4th place finish over three races.  But this Redscape season was just a hint at what it has become.  With only 13 drivers total contesting the season, the field ratings for each race were 0.58, 0.97, and 0.72.  The entire series had a field rating of 0.42.  So while the top 4 from that series -- Michael, Fabio, Rando, Chris -- do appear in the top 10 for 2015 above, those results only gave them a small head start heading into WBC that year.

The most successful in qualifying had been Randy (1st, 2nd, dnf), Mike (1st, 2nd, 4th), Don (2nd, 3rd, 4th), and Chris (1st, 2nd, 3rd).  At this point, Chris probably had the most points of anyone given that he had a 3rd place race finish from Redscape and some points from finishing 4th in that series as well.

This WBC finals may have been the most notorious ever because I had picked the long, tight, brutal track at Singapore for the finals.  Five cars would not finish this race and I got plenty of hate mail during and after the event for my track choice.

In the end, Michael ran an unconventional strategy.  On a track that is narrow and hard to pass on, he intentionally started from the back and took advantage of the large number of corners to whittle away the wear on his competitors before just beating out Kevin Keller for the race victory and WBC championship.

That one race was worth 60 points to Mike -- 36.94 for the race and 23.15 for the event win -- and would have netted him the Championship Formula Racing Organized Play trophy... if that had been a thing in 2015.  And would have been the first of two consecutive seasons in which Rando would finish 2nd in the final rankings.
Posted by Doug Schulz at 2:32 PM