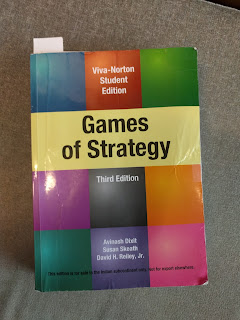 The esteemed Aaron and Austin of Dr. Wictz fame started a Colloquium with Paul Owens as they read through college text book "Games of Strategy" by Dixit (no relation to the board game), Skeath, and Reiley.  I have always found Aaron and Austin to be smart engaging people and I love the word Colloquium but I didn't want to listen to their take before reading along.

On the internet I picked up a copy of the 3rd edition, because the current version is priced as if the only people who would consider buying it are the rich parents of Ivy League students.  I'm through chapters 1 and 2 now so I went back and listened to the Colloquium part 1 which covers the same ground.  Then read Mr. Owen's Notes on Games of Strategy -- an addendum to a colloquium?

So now I'll talk about my thoughts relating to solo games, signals, screening, and my nomination for the most meta textbook section title ever.  Some time in the future I'll read chapter 3 and talk about that.

Is a Solo Game a Game?
Early in their discussion Aaron, Austin, and Paul discuss the book's particular definition of a strategic game.  First, that for a game to be strategic, it can not be purely skill based (a 40-yard-dash) or completely luck based (Russian roulette).  They also suggest that a strategic game requires two or more contestants that are mutually aware that their choices impact each other.

Aaron, Austin, and Paul suggest that the particular style of Euro games described as multi-player solitaire may not qualify as games under this definition.  Paul in his blog post suggests Black-Jack as a non-game under this definition as well.  All because each player's actions are made without regard for their opponents actions.

Maybe because I've spent some time recently thinking and working with solo rules for Championship Formula Racing, I immediately wondered if a solo game of CFR is not a game.  Is any board game I play solo a game?

If we take the book's definition literally, the answer is no.  In fact, many co-operative games may not be games either.  But if we treat the AI at the core of the game as if it were a person, does that change the answer?

Does the AI use other player decisions as inputs for its decisions?
For CFR the AI's decisions are made independent of what decisions other drivers have or may make.  So it may not be a game at that point... it might be a puzzle.  I feel like that might be true of many solo (and co-operative) games.

However, I could see how games could have AIs that take player actions into account.  I would not be shocked if it has not already been done.  More importantly, how could I add that to the AI in CFR or other games I might design?

If it feels like the AI is taking my decisions into account, does it matter if it isn't?
If I think the AI is using my decisions to inform its decisions I think I am playing a game.  That feeling is not actually dependent on the reality of how the AI works.

This may not happen a lot in board games, but it does with video games.  Many video are solo experiences where you feel like you are playing a game as Dixit, Skeath, and Reiley define it.  We know there is no human on the other side, but we certainly suspect that our actions and signals change the game's behavior.

I have often found myself playing a solo game of Plants vs. Zombies Heroes and completely forgetting I was playing the computer and not another person.  I will find myself thinking that they are likely to kill this Zombie because it can be trouble later and that's what other players often do.  Then I remember that I'm not playing a person.  I am playing an AI that may or may not be taking my play into account for its decisions.

Signalling and Screening
This is another really interesting concept that was touched on in chapter 2 of the book and discussed at length in the colloquium and also Paul's blog post.  It can also be a hard concept to grasp.

Signals seem a relatively easy concept although you can hear Aaron, Austin, and Paul struggle a little with credibility and bluffing and how they relate to signals.  Screening sounds straight forward until you try to give examples.

Examples
Scotland Yard was brought up in the colloquium as a great example of a game with imperfect information.  In that game, a signal as Mr. X might be to play a metro token.  It clearly signals that I am on one of a limited number of spaces.  Taken together with previous signals, it signal gets even clearer.  On the other hand, moving an investigator towards one of those metro spaces might be screening -- an attempt to force Mr. X into further signalling such as the use of a x2 token to escape near capture.

In Championship Formula Racing certain car builds signal certain strategies.  A 100 start speed probably means that I am trying to race from the front.  It may not, but it probably does.

In most collectible card games, certain cards signal certain deck types.  In Plants vs. Zombies Heroes, playing a Headstone Carver signals that I am playing a lot of other gravestone zombies.

Do signals have to be true?
I think there is a difference between true and credible and wonder if there is a continuum that signals exist on where bluffing may be on one end.  Is there a point on this continuum where the action stops being a signal?  How awesome that continuum and colloquium are both words in this sentence?

I suspect these concepts will be investigated more later.  We'll not the one about continuum and colloquium.

What's up with screening?
Coming up with good examples of screening that are not parts of hidden movements games seems really hard.