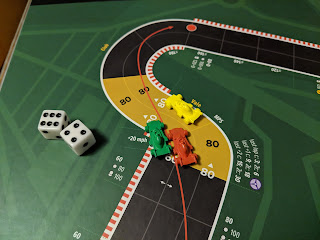 The impact of Balance on Forced Passing may be a bit of a wash.  Cars with low Balance may be un-willing to take the chance on what will be a bad die roll for them.  However, cars with higher Balance may be more willing to make the move as it is a roll that probably will not result in any loss of Balance.
Posted by Doug Schulz at 9:00 AM