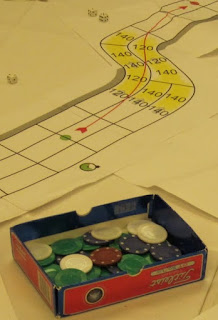 I wish I could credit this properly but I heard a great quote on one of the podcasts I listen to -- probably Ludology:


"You are never finished with a game design, but eventually you have to publish it."

Championship Formula Racing has certainly been that kind of game.  In fact, I used to roll out new tweaks every year or so.  I've tried to tamp that down now that an actual printed version exists.  However, I think it is time to start talking about 3-4 changes I will be testing for inclusion in whatever the next version of CFR is.

I identified 4 areas to work on: slip streaming, forced passing, pole bidding, and skill.  Over a couple of blog-posts I'm going to outline my objectives and proposed solutions.  I expect and hope that the community will pitch in with their thoughts as well.

Lets jump right in then with what is the most expansive of the proposed changes.  Buckle in, this is not a short conversation.

Balance is a new attribute that would replace the skill attribute.  Instead of providing a pool of skill chips that can be used to modify die rolls.  Balance provides a modifier to all rolls that degrades over time in different ways.  I basically took this opportunity to re-work a lot about how die-rolls work in CFR.

Every one of the new rules I am introducing was spurred by issues I wanted to address in the current rule set.  I hope that Balance can address a number of issues.  Lets spend a little time looking at the problems I hope to address.

Skill is the Least Valuable Attribute

The only time I ever consider taking more than the minimum amount of skill is if I already have 8 wear per lap and absolutely can not figure out why I would want more of any other attribute.  Sometimes, I will take a lot of skill just to dump into a pole bid.  But I usually only want to have 2-4 skill in hand at the start of a 3 lap race.  maybe 1 or 2 for pushing my start speed.  Maybe 1 or 2 in the bank in case I need to try a chance or forced pass.

Think about it this way.  Would you rather have an extra 20 mph in acc or dec or top speed or an extra 9% chance of making a couple tests each lap?  If I think I can use that extra 20 mph in an attribute at least twice per lap I will decrease my skill to get it every time.

I'd rather all attributes have their place.  I'd rather find a way to make skill have value... maybe not for everyone, but at least for a decent number of people in a good number of situations.  This was my main goal for Balance.

Die-rolls are Too Complicated

Until you have the chart memorized, you had to check after every roll.  I still don't have the entire chart memorized and sometimes have to check it.  That feels very much like the old wargames influence that Avalon Hill added to Speed Circuit coming through.

I don't like the fact that many turns will go by without any die rolls and yet die rolls take up a disproportionate amount of the rule book.  Simplifying the rule book is noble in and of itself but I think it is also good proxy for game complexity.  For what it is, die-rolls just seem too complex.

So if I can to simplify something here I want to but not at all costs.  These issues are listed in order.  I care more about improving the value of the attribute than simplicity.  The next two items play into making things easier as well, I hope.

Higher Rolls Should be Better

This is a minor thing and Speed Circuit has always had high rolls be bad, but I think high rolls being good is more intuitive.  Especially when you think about the die roll modifiers.  A -1 modifier being a good thing is counter intuitive.

I know that most of the current players are used to this concept, but I just think it works better for new people if we take the time to fix this while I can.

The fact that you had to declare skill chip use before a die roll was always confusing for new people and have caught more than a few veterans napping as well..  The difference between the -1 and -3 chips can also be confusing.  The fact that there were limits to their use (only -2 unless you have a -3).  It all was just a lot.

As I noted above, Balance replaces Skill as the 6th attribute.  Below is a quick chart of what the 4 Balance attribute cards would look like.

After car attributes are selected and revealed for all cars.  Negative or positive modifier chips are placed on that car's Balance card based on what the card indicates.  These Balance modifiers affect ALL die-rolls in the game.

In addition, create a starting Engine modifier pool equal to 1 plus 1 for every lap this race is scheduled to run.  (For a 3 lap race, each car would start with a +4 Engine Modifier.)  These modifiers are used only for engine tests -- acceleration, top speed, and start speed.

Deceleration modifiers can accumulate later in the race.

After modifiers are applied, a result of 8 or more is a success, a result of 6 or less is a failure, and a 7 is a minor failure.  Box cars is always a success regardless of modifiers.  This is true for all die rolls.

Exactly what happens when each die-roll fails or succeeds varies.

For example, if I had +1 Balance modifier and +4 Engine modifier, I would be at +5 to test my start speed.

The chart below shows the results of the three engine tests.

Mis-shift means that the car ends up going 40 mph slower than attempted.  This is a big change over how we do things now and I think is more intuitive than the current result -- especially for top speed tests.

Like now, acceleration and top speed failures reduce the tested attribute by 20.  A second engine failure will also still result in a DNF.

The new Minor Failure result is a failure (and mis-shift) without damaging the engine.

Note that every time a car tests its engine it will reduce it's Engine modifiers by 1.  This represents wear and tear on the engine when it is pushed to it's limits.

Also note that a Start Speed test is always rolled at -2 compared to Acceleration and Top Speed tests.

Below are some odds to give you a sense of what this means mathematically.

The odds above assume the start of a 3 lap race.  Of course these odds deteriorate each time such a roll is attempted.  But note that the first 2 tests at +3 Balance would automatically pass.  Odds would start out worse in a 1 or 2 lap race and would start out better for races of 4 laps or more.

The odds above are also for a 3 lap race.  Start speed test odds never change since you can only ever test this at the first turn of the race. 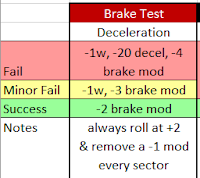 First note that deceleration tests have a permanent +2 modifier.

Just as now, a failure results in reducing deceleration by 20 and requiring the car to use 1 wear for the deceleration (remember deceleration tests never really fail, they just result in penalties).  A second failure will still result in a DNF.

The new Minor Failure is a failure without deceleration damage.

Note that every time a deceleration test is made at least -2 will be added to that car's deceleration.  More for the failures.  Brake stress is mostly about over-heating.  But heat dissipates over time so every time a car passes a sector marker (there are 3 every lap) it removes a -1 modifier from its deceleration.

Above is the starting odds for deceleration at different balance buys.


Because of how negative deceleration modifiers go away, if you do not test brakes too often and do not fail your rolls, you can keep testing deceleration or late braking at the same odds through out the race.  With +3 balance, that could be very powerful. 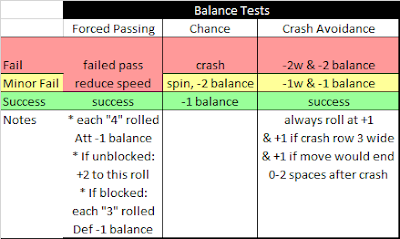 Forced passing is the only die-roll without a Minor Fail result -- they simply count as failures which work exactly as before.  The only difference for forced passing from the current rule is that the attacker can be "damaged" even if the defender does not block and damage takes the form of -1 balance modifiers instead of wear.

Chance rolls are pretty similar to before but cars will take negative balance modifiers every time -- unless they crash.

Crash avoidance gets its own set of results -- which I think is cleaner -- and they are friendlier results. 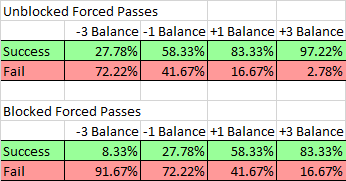 Above are the starting odds for Forced Passes. Below are the odds for chances and crash avoidance.

The biggest strategic thing about these rolls is how balance modifiers affect every other die roll.  If you take a chance in the first corner, your balance is reduced by -1 even if you succeed and that will impact every other roll all race.  Forced passes, on the other hand, might never drop your Balance modifiers.

Two things this also means.  First, there are no skill chips to use on pole bids now... only wear.  Second, Balance modifiers affect ALL die rolls.  So pole bid tie-breakers should always use 2d6, high winning, and apply Balance modifiers.

How Does This Impact the Game?

Lets looks at my goals and also some unintended consequences I've already noticed.

Is Balance More Valuable Than Skill Was?

I think so.  The 2 pt buy of +3 skill comes with some serious possibilities.  I could late brake into 1 or 2 corners every lap with no chance of damaging my deceleration.  I've got 3 or 4 basically free acceleration or top speed tests. Forced passes and at least my first chance come with a 83% success.

I would also seriously think about a +1 or +3 skill if I wanted to test my start speed.  In the past you could take only 2 skill per lap and still have enough to throw skill at the start speed table.  Low balance will make that roll very risky.

The fact that balance can now impact tie-breakers for pole bid -- and I suspect there will be more ties now that there is no skill to bid with -- could be interesting as well.

But in the end, we'll have to see.

Die-rolls are Too Complicated

Knowing that all rolls are the same helps (< 7 fails, etc.).  I also want to rejigger the stat cards so that die roll notes are on the cards.  Then in theory all you have to do is add up the related modifiers, roll, and hope you get 8 or more.  I am a big fan of off-loading rules from the book to the components when you can.

I suspect it will become less complicated as people get used to it.  But I'm not convinced it will in all be easier.

Higher Rolls Should be Better

Well I can check that one off as a success!

I think this method of modifying rolls is easier to deal with.  But I did add some complexity with changing modifiers, especially the fact that deceleration modifiers go away over time.  This might end up being a wash.

I like the fact that now bids can only be made with wear.  I think it will lower the bids generally but it also may cause slightly more pain for people who do bid for pole.  I'm not going to go as far as to say that this will balance out run-from-behind strategies but it might help.

There is already testing planned for this, but you should feel free to implement on your own if you want.  Usage of this rule set will still allow races to count towards Organized Play.

Here is a one-page cheat sheet.

What Do You Think?

Enough from me.  Give me your reactions.
Posted by Doug Schulz at 9:00 AM