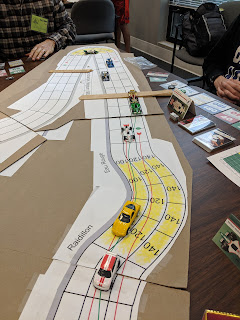 Congress of Gamers provided another great Championship Formula Racing opportunity.  This time around we had 8 drivers on the 1985 version of Francorchamps (PDF track map).

I now have a trio of Francochamps tracks.  The modern version (PDF) which saw use in F1 starting in 2007.  The first short version (PDF) that was used only in 1983.  For this race we used the version raced between those two.  It combined the bus stop and la source layouts from the 1983 version with the start finish line from the modern / 2007 version.  I anticipated that the track would run more like its 2007 than its 1983 sister.

Michael Polcen and Don Tatum must have had similar thoughts, built cars with 100 start speed, and bid highest for pole.  Michael just won out that bidding with 5 to Don's 4.5.

On the right you can see Michael maintaining the lead through Radison and onto the track's longest straight.  Don follows closely behind.  Daniel Nace sits 3rd, Paul Bernhardt 4th, Jonathan Smith 5th, Will Kennard 6th, Me 7th, Dave Nace 8th.

Michael and Don ran an excellent race against each other over the 2 laps we ran.  If I had to nit-pick anyone's plot this was one that stood out.  Don could have used a slip this turn, and the outer line to end up right behind Michael for another slip.  It might not have mattered, but the space or 2 he gains from next turn's slip might have made a difference. 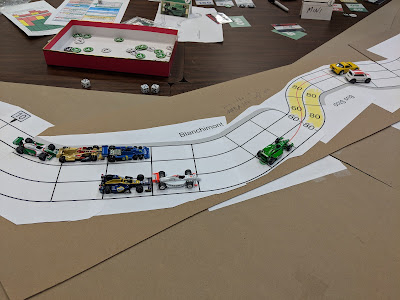 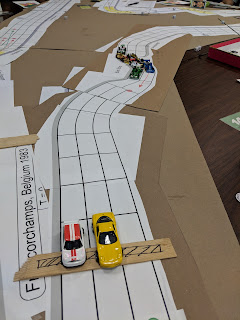 As it was, Michael held the lead through out lap 1.  Above, the pack races towards Bus Stop for the first time with Paul now in 3rd but a couple spaces.  Daniel sits 4th now.  I made up a couple spaces down the straight with my 180 top speed into 5th.  Will sits outside me after some slips.  Jonathan is behind me in 7th and Dave is right behind him in 8th.

The very next turn, Michael starts lap 2 in the lead with Don right beside him.  Paul is still in 3rd, but Daniel and I are right behind him.  I get past Daniel with my higher acceleration down to La Source.

For much of lap 2 there are two separate battles at the front of the field.  Don and Michael for the win.  Paul and I for the last spot on the podium.

Don gets past Michael early in lap 2.  But it feels like Don made a sub-optimal play just to try and break up Michael's rhythm.  In fact, I heard Don say something similar to Michael after the race. 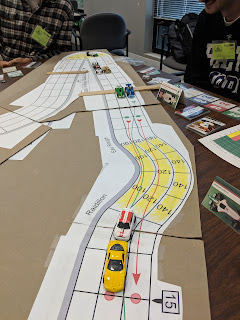 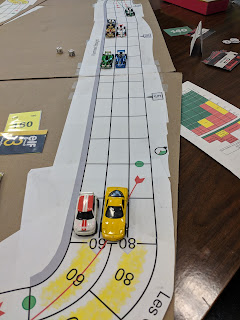 Above on the left is Don leading Michael a couple corners into lap 2.  By Les Combes, Michael has pulled even with Don.  Below, Michael has powered back into the lead. 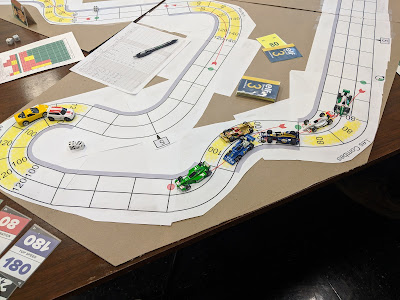 Meanwhile Paul has continued to hold me off to keep hold on 3rd.  But the field is doing its best to contest that position too. 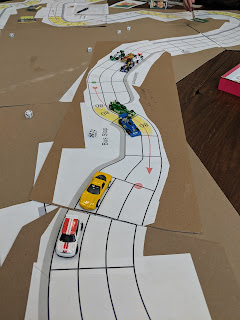 With bigger top speed, brakes, and more wear I would finally get past Paul through the final corner.  But neither of us could challenge either Michael or Don for the win.

No retirements and a fun time had by all.

Was that 1/2 pt of bid the difference between Michael and Don?  Was it that missed slip from Don early in lap 1?  Was it Michael's test to get to 180 down the straight with Don just out of slip position?

Hard to say for me, but it was definitely some excellent racing by both gentleman.

For myself, I have had decent luck with a 40 accel, 80 decel car on this track.  I decided for something a little difference and got some decent value out of the 60 accel.  I like running from behind on this track, but I know that this version and the 2007 version will likely spit out a winner from the front row and the best I can hope for is 2nd or 3rd.

Which leads me to like the 1983 version of Francorchamps best.  But only by a little.
Posted by Doug Schulz at 9:00 AM