The What-If Champion of 2016 for Championship Formula Racing

... would have been Chris Long... perhaps the best what-if-champion ever.

In last week's Organized Play rankings update I mentioned that I had pretty good data going back to 2013 [1] for Championship Formula Racing results.  What I mean by pretty good data is more than one source.  Prior to 2013 close to all of my data comes from the World Boardgaming Championship tournament (and its predecessors).

From 2013 on, I had at least 2 major tournaments and sometimes some one-off races to draw from.  Below are some stats from those seasons including what I've logged so far in this season.

This historical data was good to have.  It gave me some reality checks when fine-tuning the rankings process and the 2016 data is used this year to help weight the competition in each race.

It also means that I can go back and run the rankings for each of those years.  These years aren't official Organized Play seasons and none of the what-if-champions from 2013-2016 will get any prize. 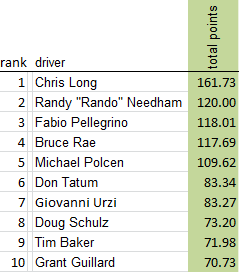 But, just for fun, what would have happened if Championship Formula Racing Organized Play had existed in 2016?  Spoiler alert... Chris Long won and racked up the most points by far of any previous what-if-champion.


A quick note about this season... because the results of a tournament and its races do not count until the tournament is over and it took me a long time to finish my F* PBeM, many of those races actually started in the 2015 season but counted in the 2016 season.

Chris won two races that season but also had two second place finishes that counted for more than many wins do based on the competition.  His best race was a win in the top tier of the F* PBeM which had a field rating of 1.55.  He placed second in another race in that series.  He also won a qualifying heat at WBC that year and placed second in a top tier race in the Redscape PBeM.

Chris' main competition in 2016 came from Randy Needham and Fabio Pellegrino.  Both won 3 races to Chris' 2 but while their top-2 races scored them more points Chris' 3rd and 4th best races closed the gap for him leaving him with a slight edge in points from his top-4 races that season.

Chris really pulled away in the rankings due to his tournament results.  Chris not only won F*, he finished 3rd in Redscape's tournament that season.  Combined he received 52.54 points from those two tournaments -- more than double anyone else in 2016.

Bruce Rae was Chris' closest competition based on tournament results after winning WBC that year.  But Bruce labored in lower tiers of F* that season and ended up 15th.  Michael Polcen won the Redscape tournament but finished 19th in F* and 26th at WBC.

One of the reasons that Chris' total score of 161.73 was so much higher than previous what-if-champions is because the 2016 what-if-season was the largest to that point in every metric except total numbers of tournaments.  But Chris drove the hell out of that season and gaped a great field of competitors.