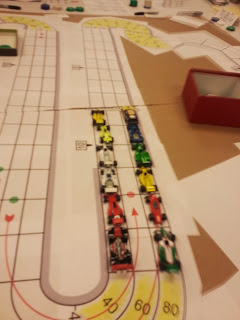 It is an amazing feeling to put something out there that you've made and have people like it.  At some level I've been doing this for years at WBC and online but it feels different to have people give up hard earned money instead of just their time and attention.

Now it is time to acknowledge the actual hundreds of people who helped out in mostly chronological order.  Know that I likely owe each of you more thanks than expressed here.

Thanks to Thomas M. Divoll and John B. Reilly who designed Speed Circuit forever ago.  First published in 1973 by 3M, I hope that Speed Circuit is a proud parent of Championship Formula Racing and that Divoll and Reilly would be honored to have their creation continue more than 40 years later.

Special thanks to Dad who taught me the game and later went to many an AvalonCon and WBC to play it and support it and provide his 2-cents on the revisions that became CFR.  Thanks to Mom for playing many a 1-lap race around the old AH Monaco track with Dad and I.

Thanks to Jim Fleckenstein The Elder for making me go to my first AvalonCon for work (true story) where I discovered that people outside my family played Speed Circuit.  Thanks to Rob Cunningham who showed me that the game is best played with large fields and large cars and that there was a lot of space around the core mechanics to modify the rules.  Thanks for Don Greenwood for managing the convention where CFR was birthed.

Special thanks to the posse from my neck of the woods who have spent many many years supporting the game and helping me craft it.  First among supporters and play-testers -- Mike Aubuchon, Jim Fleckenstein The Younger, Chris Long, and Tim Mossman.

A big shout out to the guys who have helped expand the community around the game by running tournaments both in person and online: Chris Long took over stewarding duties from me many years ago at WBC; Fabio Pellegrino ran a PBeM for years and races in Italy and introduced the Italian contingent to CFR; Robert Rund ran two WBC PBeMs; Michael Polcen started a PBeM at Redscape a couple years ago; Kalvin Miller helps run the Redcsape leagues with Michael and also built The spreadsheet; Chris Brandt has been running a tournament at PrezCon for years; Tony LaMorte has been running another PBeM for years; Chris Hancock, Doug Galullo, Chris Brown, Randy Needham, and Jeff Harrington all stepped up to help me run my PBeM when it threatened to bury me.

Crazy thanks to Jim Dietz who reached out to me unsolicited a couple years ago to see if I would make CFR for Jolly Roger games.  I may have tripped over myself saying yes.  Jim has been a great guy to work with through the early development process -- pushing for things that turned out great and willing to let go of things that did not.  Also a shout out to Ginger Ludden who has made CFR look like a professionally designed game and not something I built in my basement and Colin Young who helped make the Kickstarter work.

I am also amazingly lucky to have a family that supported me.  Michael just recently decided to give CFR a try and loved it and was my wing-man for the Learn-To-Play videos of the game.  Its been really neat to be able to play with my son a game my dad taught me.

I can't thank Jodi enough.  She put up with me disappearing every summer for years to go to WBC and stalking off to the office too many nights to work on rules or tracks the last year plus and was still the happiest for me when the Kickstarter funded.  I'm lucky to share my life with her.

Finally, because the list is really long, I have to thank all of the people who have played the game with me over the years.  The Championship Formula Racing community is one of the best around.  Many of you have offered suggestions and ideas that became part of the game, many of you probably funded the Kickstarter.  All of you were hugely support even if all you did was play the game.  Apologies to any I forgot.