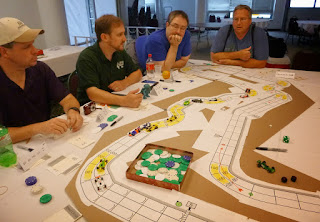 The largest in-person Championship Formula Racing tournament.  The birth place of the game.  The room where the years and years of play testing happened.  The World Boardgaming Championships are less then 2 months away so here are the details.

Tracks for this year:

One rule change for this year:
After a lot of debate about the start speed test table, I made a slight change. The idea is to prevent stalls from feeling like they end a driver's race after the first turn.  First, the odds of a mis-shift increased at the expense of the odds of a stall. Second, stalls no longer result in damage to the car and are now treated like a spin for all purposes.

For those of you who kickstarted CFR, we may have actual production copies of some of the individual components there.

Chris Long will be ably Stewarding for his 4th year in a row.  Huge thanks to Chris for doing that.  For more information about scheduling see the WBC page for Speed Circuit.  (Likely the last year the tournament will be called that...)
Posted by Doug Schulz at 7:27 AM