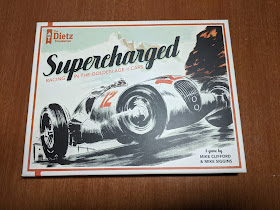 I got my Kickstarter copy last week and the game has taken over my workbench since then.  I played probably 10 games, all solo.  My quick reaction at this point:  This is a light, quick-playing game with some engaging bits.  I liked it.  Quick disclaimer, Jim Dietz was instrumental in getting CFR published for which I will always be grateful.

Racing games have a habit of being long or being racing games in theme only.  I applaud designers Mike Clifford and Mike Siggins for coming up with a quick play game that feels like racing.  I admit that people looking for deeper decision making may not enjoy this game.  But I also think that there is a bigger decision space here than might be apparent at first.

It is tempting to think that your only decision is which of your cars to 7 spaces and which to move 6.  But more often the decision is really IF you want to move all of that speed or not.  Slipstreams make a huge difference in this game and shorting yourself a couple spaces this move to set up a slipstream is probably worth it.  Or maybe you should move fewer spaces to create a blocking situation for some cars right behind you that have yet to move this turn.  Or maybe I want to move a little less because it means that a car that moves up behind me later in the turn will be in a curve and not eligible for a slip next turn.

Don’t get me wrong, this is not the thinkiest game.  But after a couple plays you can find ways to be thinkier with your moves.

There are some specific design elements I really enjoyed with this game.  The grid position assignment was very well done.  Faster teams will be randomly assigned to grid spots 1-4 and then mixed in with the next tier of teams for spots 5-11 and so on.  I think this works really well as there is a level of randomization within constraints. 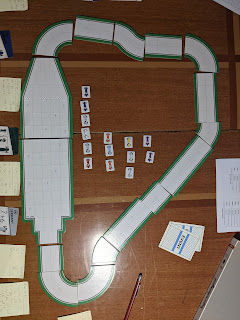 I love that you can reconfigure the track.  Although I get that this is mostly cosmetic.  The reality is that the track only matters to the degree that you can change the order and quantity of straight spaces versus curve spaces.  If you are going to use all of the pieces every track, there are really only so many variations you can create.  And yet, it’s fun to do.

This is not an overly produced game but I really like the design esthetic of the 1930s era cars and the added bit of rationale when cars get bounced from races is great.  (Yes, drivers got sick ALL the time during races back then.)

As with any game there are things I did not like as much.  In my first handful of plays I noticed the track was REALLY clogged up in the back during turns 1 and 2 after the starting procedure.  If the random determination of who went first was mostly backmarkers you ended up with a LOT of spun cars because there was literally nowhere for them to go.  Recovering from a spin requires a pull from the Action Deck and can mean that car is done for the race.  Lots of spun cars means you churn through the Action Deck which means more and more Events.  Events can be random one time bonuses but can also mean random retirements.  While I saw this happen more in early turns before the field naturally spreads out, I would typically cycle through the Action Deck about 3 times per race.  I get that a lot of retirements is very thematic, but when I saw the French team lose both cars that were 1-2 in the race a turn from the finish line it just felt bad.  This would have been a table-flipper if it were competitive.

So, I came up with a couple ideas, one of which I REALLY like.  First a little background.

Every game you control two different teams.  Each turn, 1 card for each team is shuffled together with cards for all of the other teams and that random draw determines who moves in which order.  This very random turn order is what I think is the cause of more mayhem than I enjoy.

If one of your teams has had both cars removed from the race, continue to play both cards because that hides which pile you put your remaining team in.

This ends up doing several things I enjoy.

First it helps solve track congestion issues.  If I see that one of my cars has a lot of traffic in front of it that I want to try to avoid, I can put that team’s card in the “move second” pile.  Maybe things will have cleared out.  I felt like this played out the way I’d hoped.  But it also had another impact I did not anticipate.  Because fewer cars got stuck in situations where they had no options and had to spin, I churned through the Action Deck less.  Now I’m shuffling only once per game not three times.  That means a LOT fewer random events knocking out drivers for no real reason… especially late in the game.

This rule also adds a decision to every turn that was not there before.  Sometimes it seems relatively obvious that I should make one of my teams go first and the other go second.  But often I saw myself considering both teams for different reasons.  And then you are put in a situation to maybe prioritize one team over the other or start trying to anticipate the other players’ choices here.

I’m sure this modification is not for everyone, but if you are looking for more decisions and less random give it a try.

A few words about Supercharged as a solitaire experience.  Supercharged solo is not set up to be competitive.  You aren’t racing against the game.  You are just running the system to see what happens.  I actually enjoy that kind of solo experience but I realize that will not be best for everyone.

I also decided that I’d rather play this game solo with the 4-player rules than the solo rules in the box.  I think the game is easy enough to play multi-handed.  There is not a TON of player interaction in your decision making.  And it’s easy enough to anticipate what a Team might decide to do based only on their situation and not trying to anticipate other Teams’ moves.  This also means you get to play with the Tactics cards which provide more decisions to make and keeps more cars from spinning out.  The Great Maneuver card is often a get out of jail free card when you would otherwise be stuck spinning.

A light, quick racing game with enough flavor to feel like racing.  The lighter level of decision grit keeps the game light and quick but your satisfaction with that will vary.  I recommend my turn order modification.  I also recommend playing 4-handed solitaire and not the solo rules in the game.  It honestly gives you a better flavor of the game.