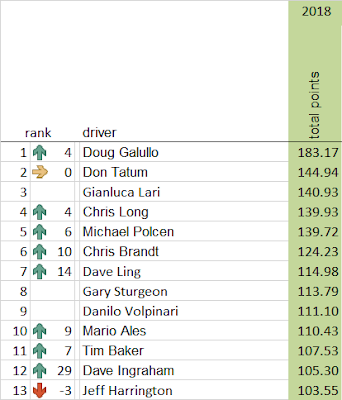 The World Boardgaming Championships arrive in a couple weeks which means we are getting ready to crown another CFR Organized Play Champion.

Stats are updated so that only races from WBC are left to account for.  Doug Galullo remains in the lead but his lead continues to shrink for reasons I explained back in May.

You can see total points for the top 13 here or see the complete rankings for all 131 currently ranked drivers.

By my count there are 9 drivers who definitely have a shot at passing Doug G with a win at the finals table at WBC and at least 2 more who are close enough that deflation might get them there.


Assumptions:
I am assuming that the finals will end up with an AFR+ around 2.00, each qualifying heat will have an AFR+ around 1.00, and the tournament at large will have a value of 1.83.  This assumes similar values to last year.

I am also assuming that the independent "demo" race being held at WBC does not have a huge impact on the event... although it could have some impact.

But those are just raw points.  Remember that a driver's OP points is equal to their top 4 races and top 2 events by points.  For example, Don stands to gain 50 points at WBC.

If Don wins every race he enters at WBC. he would book 3 races worth 23 points each, 1 race worth 46 points, and 1 event worth 42 points.  That is only worth 50 points to Don because only the 46 point finals is more points than Don's current top 4 races and is only 23 points better.  The 42 point tournament is worth 27 points to Don as it is that much better than his current 2nd best tournament score.

But those 50 points are more than enough to potentially beat Doug who sits only 39 points ahead of Don.


Who Needs to Do What to Have a Chance
First off, keep in mind that because all scores get re-adjusted after every race, scores can and will change a little even if a driver does not get a great result out of WBC... especially tournament related points.  So being close to closing the current gap to Doug G might be good enough and might not.

That said, the following drivers look like they can gain enough points just from qualifying for and winning the WBC finals.


Of the above, three might be able to pull off an OP title finishing 2nd in the WBC finals:

The following four drivers might have to win a qualifying heat in addition to the finals in order to surpass Doug -- depending a bit on how scores get readjusted:

Mario and Jeff probably have to win two qualifiers on their way to a Finals win:

What about Doug Galullo?
Obviously Doug has his destiny in his hands.  Winning the WBC finals guarantees him the OP title as well.

Second in the finals might also make it impossible for anyone to catch him -- adding 28 points to his total.  Third in the finals would net Doug 16 points which would probably knock many of the above drivers out of contention -- all except Gianluca Lari, Chris Long, and Michael Polcen.

Fourth in the finals would only net Doug about 5 points -- enough to make the math harder in many of the close calls but not enough to keep one of the top competitors from winning WBC and snatching the title from him.  Same goes for a qualifying win without a top 4 finish at the finals which would net him about 2 points.


Everyone Else?
Everyone else, including 12th ranked Dave Ingraham, 14th ranked Tim Mossman, and everyone below that is probably out of contention for the OP title.   Even a newbie who shows up, wins 3 qualifying heats and the finals would "only" pick up 157 points.  Possibly good enough for second place in OP this year.


Caveats
Remember that scores are fluid in this system.  The value of older races change every time a new race is booked and compared to every other race already run.

The numbers above include some rounding because I'm lazy.

If more people show up to WBC it could increase the value of the event itself and give more people a better shot at overtaking Doug (30 different drivers participated in WBC last year but 37 participated the year before).  Same goes if higher ranked drivers make the finals (last season included a pretty highly ranked set of drivers making that race worth a good bit).

If fewer people show up to WBC it will make the event worth less in total and make it harder for people to over take Doug.  Same goes if the finals includes fewer highly ranked drivers.
Posted by Doug Schulz at 9:00 AM