Michael and I got a good battle in recently.  We decided to pair down our lists to 200 points and try to use as vanilla a set of guys as we could field.  So our lists include very few odd or complicated skills.  We are obviously also not using any advanced rules and are still very much learning how to do this.

Michael's PanO army is largely based around the Jotum.  Jotum is the lieutenant for an extra order and can also push some buttons with the crabbot.  The Dronbot is there to provide some AROs.  Trauma-Doc and Palbot are mostly there for button pushing.  Two Akal Commandos give this list some element of surprise.  Michael really likes AD: Combat Jump.  The Fusilier is there to round out the team with an extra order that can push a button if she has to. 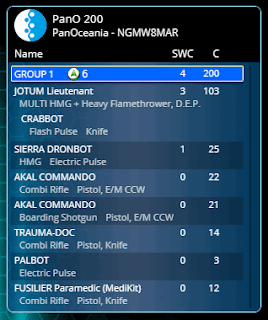 My Nomad army is based around using the Sin-Eater and Grenzer to lock down some lanes with great ARO capability.  Let the Gecko and Mobile Brigada make room for the Alguacil paramedics to go push buttons.  If I have to the Gecko Pilot can jump out and push buttons as well. 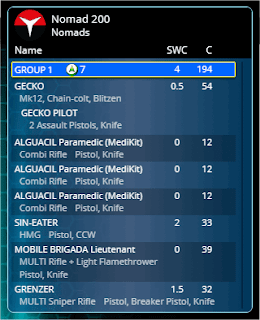 The mission is one I came up with myself, I describe it a little at the beginning of the video but here is a PDF mission description as well.