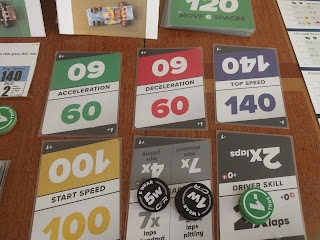 My 10 car field of historical drivers and I took the short ride over from Belgium to England in preparation for race 7 out of 10 in my 2017 solo championship.

I'm excited to be leading the series if only by a point after I drove through the carnage at Francorchamps for my 2nd win.

My plan at Silverstone is to ignore the desire for a high top speed.  I want to bid low, start fast with my 100 start speed, then use my 60-60 car to save some wear for when I really need it.  I'm hoping that the 140 top speed doesn't bit me.  I will be wrong.

Below are the results after the pole bid.  Fangio and Vettl bid the most again.  Fangio got pole after a tie-breaker roll.  Kimi Räikkönen is actually inside of me in the 4th row -- much higher than he normally starts.  Stewart's orange car sits outside row 2. 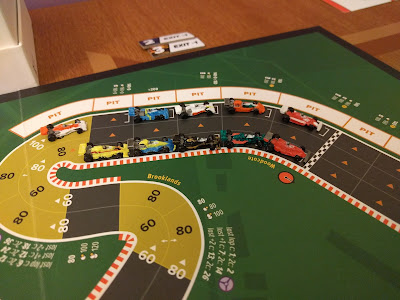 The First turn was important to me.  I wanted to pass some people here.  Below you can see that I did pass Hunt (white car) and Mansell (black car) but Alonso did his usual and ended up inside me.  Partly that's because I chose to end up behind Rindt for a possible slip next turn. 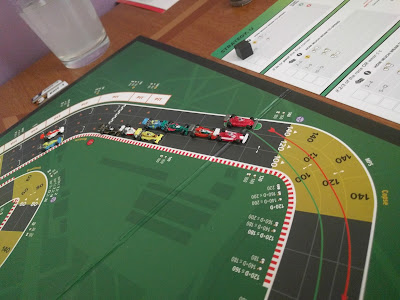 A couple sectors later and we are half-way through lap 1 and I've fallen back two more spots.  First Hunt dove inside me while I was on the line in front of Becketts.  Hunt spends more wear than I to stay inside through the corner then uses his better top speed to pull ahead.

Then at the end of the Hanger straight, Mansell spends more wear in the corner and ends up inside me after I got the slip to stay even.  Not much changes as lap 1 turns into lap 2. 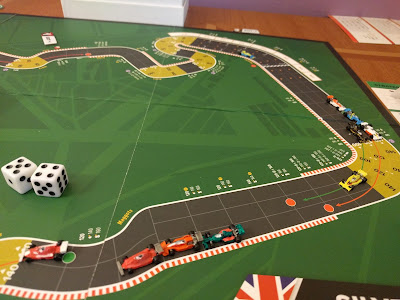 Vettel leads in the white-trimmed Ferrari but he had only 2 wear left at the half-way mark.
Fangio sits second and looks good with 8 wear.  Stewart has 4 wear in 3rd but broke his top speed trying to go 180 through Copse the turn before the image above.  Rindt has 3 wear in 4th.

Alonso sits in 5th -- half-way between the lead pacl and the rest of us -- with 7 wear.

Raikkonan is way back there but has 14 left still.

This is the crucial turn.  We start with the groups pretty much as they were above to start lap 2.  Alonso has fallen back to the pack.  Raikkonan went 200 last turn to close up some. 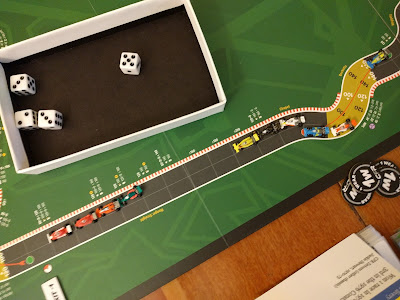 In the picture above, note a couple crucial details: 1) Fangio is right behind Vettel, 2) I'm no in a slip position.  In the picture below, there were two big things happening.

Most importantly for the race, this is where Fangio makes his move.  He pushes his top with dice, makes it, spends 2 wear in the corner, and passes Vettel cleanly.  As we'll see later, this is the end of the race.

Most importantly for me, I went from 3 spaces behind Alonso to 5.  Alonso pushes to 180, Mansell got two slips, Hunt also pushed to 180, I only went my 140 top.  Thankfully, Fittipaldi broke his top speed trying to pass me or this would have been even worse. 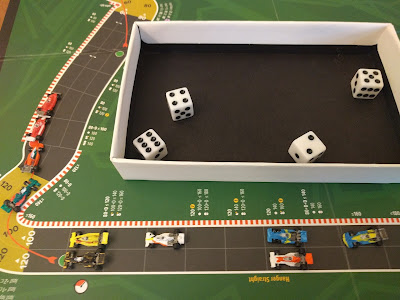 Below we have two forced passes.  First (on the left), Alonso goes 180 and squeezes past Rindt into 2nd. 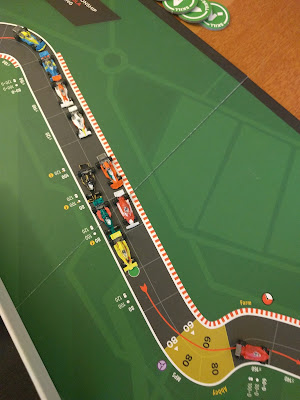 Two turns later (on the right), I pass Stewart into 6th.  Raikkonen broke his brakes trying to slow for Abbey and is the first retirement on the day. 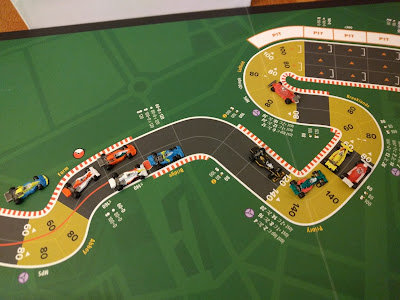 The next turn is below.  Fangio waves to his pit crew.  Alonso enters Luffield, but not quickly.  Vettel takes a chance and crashes. 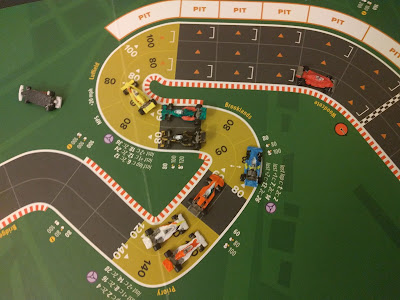 A turn later, Mansell is next to Alonso having run through Luffield faster.  Rindt it right on his tail and I'm behind Rindt. 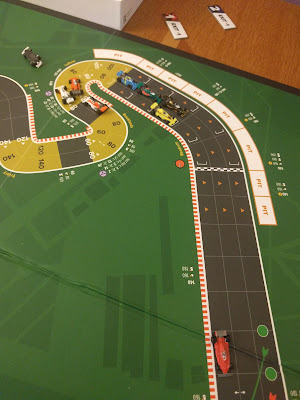 The end result of this is that Mansell was able to pass Alonso for a second place.  Rindt was also able to get slips to pull into 3rd.  Alonso ended up 4th and I was unable to improve on 5th.

I built another Google Photo Album for this race.  Every turn is recorded there.  I made some notes as well.  My advice is to click on the first image, click on the circled i symbol to reveal my notes, then page through that way.

I stayed ahead of Stewart in the season rankings who finished 6th.

And a big win for Fangio -- his 3rd this year -- to put him right back in the conversation for the title with 3 races left.

A disappointing result for Vettel who retired from his second race in a row to really fall behind the 3 season leaders.  Also disappointing for Alonso who dropped from 2nd to 4th across the finish line.

On the other hand, this was the best results on the season for both Nigel Mansell and Jochen Rindt who finished 2nd and 3rd.

Raikkonen's first DNF of the season means that there are now only 3 drivers who have finished every race: Me, Stewart, and (ironically) James Hunt.
Posted by Doug Schulz at 8:30 AM