On to race 2 in my planned 10-race season of solo CFR play: 4-laps at Monte Carlo.  (I randomly assigned 2-4 laps to the tracks I randomly arranged).  I'm still using my own pre-production testing components but should get to switch those out soon.  Race report from race 1 at Yeongam in video form.

Vettel beat out Fangio for pole.  But bidding was not very high after those two.  Monaco is another Track Rating of 1/2 laps like Yeongam so I figured I'd do ok with a modest bid and end up 4th on the grid. 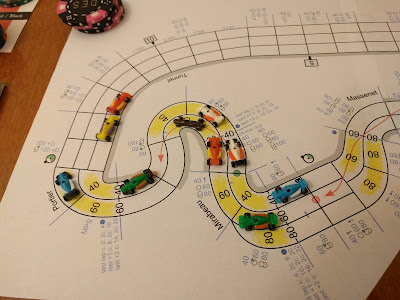 Nothing too exciting after 1/2 of lap 1.  Sebastian Vettel (red up front) leads the field onto the main straight.  Jochen Rindt (yellow) sits right behind him after passing Juan Manuel Fangio (blue w/ black) by diving into Mirabeau hot.  Vettel and Rindt are both running Front A strategies.  Fangio is using the Stalking strategy.  I'm sitting 5th (brown) having just stuck James Hunt (white) in the corner. 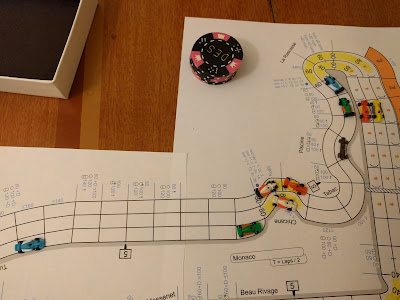 Nearing the end of lap 1 for our leaders.  Rindt (yellow) has stayed on Vettel (red up front) after slips through the Tunnel and the Chicane.  Jackie Stewart (green w/ black) has caught up to Fangio (blue w/ black) in the battle for 3rd and 4th.  I'm all alone in 5th (brown).

But this picture mostly was taken to talk about the action in the back.  Hunt (white) started out next to Nigel Mansell (white w/ black).  Hunt went 140 then automatically late braked to 120 and hit the apex of the Chicane at 120 for 2 wear.  That forced Mansell into the first outside space at 120.  Alonso (red behind) was right behind Hunt and also went 140 this turn planning to use his red chip in the corner.  He got a slip from Hunt, spent 2 green skill forced passing Mansell and used 2 wear and his red skill in the corner to pull even with Hunt.  Dramatic!  Now we'll see if it was helpful. A couple turns later, Vettel (red up front) is still leading the race as he and Rindt (yellow) complete their first third of the race.  They both have 14 wear left. Vettel has the higher deceleration.  Rindt did not have a good turn here.  Trying to clear Casino, he ended up forced outside and probably wasted those 2 wear.

Fangio (blue w/ black), still sitting 3rd, has 24 wear.  I'm still 5th with 21.  Keep an eye on the cars right in front of Sainte Devote: Hunt (white) is on the line.  Alonso (red) is in the middle lane, but off line.  Mansell (white w/ black) is behind Alonso but can get to the line from there. Only 2 turns later, we continue to see Vettel (red up front) stuff Rindt (yellow) in corners.  This time it could easily result in creating a nice lead for Vettel onto the back straight.  We also see Stewart (green w/ black) pass Fangio (blue w/ black) by diving into Mirabeau for a couple wear.  I'm (brown) right behind both but could easily get caught in traffic.

Note that Mansell (white w/ black) has repassed Alonso (red)... illustrating how the dramatic pass does not always pan out in the long run.  Three turns ago Alonso used 2 green skill and 1 red skill more than Mansell to pass him in the Chicane.  Two turns later, Mansell uses a wear in Sainte Devote on the line while Alonso uses no wear off line and Mansell is back in front. 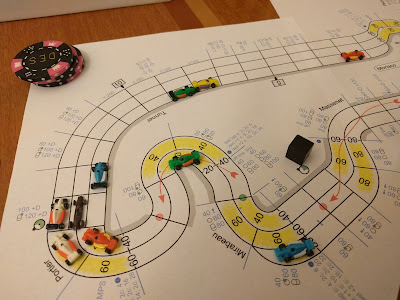 Pretty much half-way through lap two and everyone is into the 2nd-third of their races.  Vettel (red) has gaped Rindt (yellow)as expected. Stewart (green w/ black) has caught Rindt and has a better car with the same 12 wear.

Hunt (white) with 14 wear and Alonso (red) with 17 wear also cleared Portier this turn.  Raikkonen (blue) still has his starting 24 wear in last. ... and the very next turn Mansell (white w/ black) pushes top for 160 and passes both Fangio (blue w/ black) and I (brown). Raikkonen (blue) spends his first wear of the race. 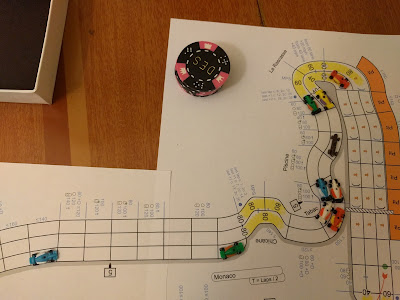 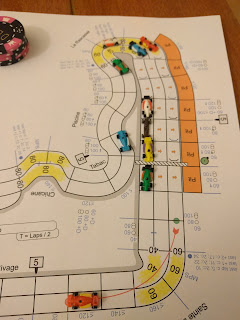 Two more turns (pictured on the right) and Stewart (green w/ black) has completed the pass against Rindt (yellow) and Mansell (white w/ black) and I have caught those two.

Last turn Stewart and Rindt both went 60 to clog up the last row of La Rascasse.  I ended up spending a wear to late brake to 80 behind them while Mansell hit the 60 space behind me at 100.

Stewart used his higher acceleration out of the corner to take over 2nd place.  I was able to accelerate to 100 through the outside 80 space at the end of that corner to stay with Rindt and in front of Mansell.

Meanwhile Hunt (white) has wasted 2 green skill in a row late braking for traffic.  And at the half-way point in the race Raikkonen sits roughly 4 turns behind Vettel with roughly 10 more wear in hand.

This has gotten pretty long, so I'm going to split it here and post the rest of the race report in a separate post.  ... and Part 2 is here.
Posted by Doug Schulz at 10:08 PM