2018 Organized Play Season Will Be Huge!

Well, it certainly shapes up that the second season of Championship Formula Racing will be bigger than the first.

I've updated the calendar and there are already 4 in-person seasons or tournaments planned plus 3 more single race live events and the 2 Play-by-email seasons that are already underway but will count towards the 2018 season as they are still in progress. 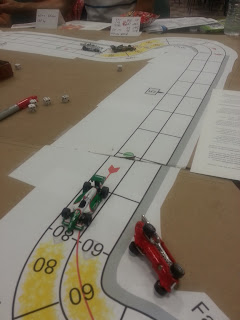 The first race of the 2018 season will be held August 26th starting at 10:30 am at the Congress of Gamers in Tysons Corner, VA.  If you've been to the event in Rockville by the same name, expect the same event in a different setting.  Sadly, I will not be able to make that race but Michael Polcen will ably steward.

For more information about the Congress of Gamers see their web page.

Also note that I plan to run races at the Congress of Gamers in Rockville to be held October 7-8 and the related Winter Games Fest in January.

The big newcomers to this calendar are the biggest seasons planned for 2018 -- one in Detroit and one in San Marino.

The Detroit series will feature 8 races and starts September 8th.  This is a great group of veteran drivers that are more than happy to bring in new-comers.  Check out their web site for more details.

The San Marino season is planned for 9 races starting September 26th.  This will be the first CFR event to take place in Europe.  Given the large number of Italian fans of CFR, the interest from San Marino makes sense.  Check out the web site for the San Marino gaming association that is running the season for more information... if you can read Italian.

Tournaments for PrezCon and WBC are planned as usual.

There are two email based seasons going on right now.  Mine and the Redscape series.  Both run 3-race seasons with multiple races to accommodate all of the participants.  Both use a ladder system to advance drivers between the heats.

For more information about my series, see that page on my site.

For more information about the Redscape series, email me and I will pass you on to Mr. Polcen.

Long time driver, Robert Rund is also thinking about putting together a email race using the pitting rules.  If you are interested, email him.
Posted by Doug Schulz at 8:30 AM