This game was inspired by two complaints about racing games I heard from different people in the industry.  Jim Dietz of Jolly Roger games once told me that there were not enough two player racing games.  Not long after that Tom Vasel wondered why racing games were never quick playing.  I don't recall which review it was in.  Both comments stuck with me and at the risk of pigeon holing myself, I started working on a quick-playing, two-player racing game.

Ironically, BGG is currently running a 2-player game contest that I entered the game in.  So if this already intrigues you, go print out the game and give it a play.  While you are there, find other 2-player games you might like.


The initial version was an attempt to model real life production sports cars.  Each deck of cards had different values for acceleration, braking, and handling.  Each turn you would play any number of cards one value or another.  When you hit a corner, you would draw tokens from a bag equal to your speed minus your handling hoping not to draw too many of the bad ones.

The initial problem was that card draw luck was too dominant.  Each card could only do one thing.  If you did not draw enough of what you needed, when you needed you would lose through no fault of your play.

So I gave each card two abilities at different levels.  This helped, but the whole system was still too much based on card draw luck.  Each player had an identical deck of 12 cards.  Which 4 or 5 you drew to start and as the game progressed defined your play.  There really were not enough good choices in the game. 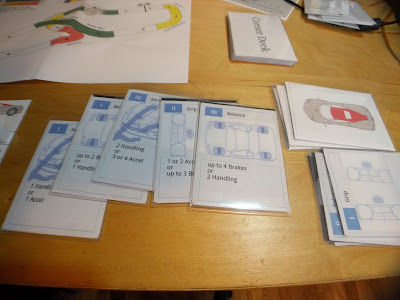 As I continued to refine and play test I realized that I needed to simplify and focus on the two elements I had chosen for the game: hand management and push your luck.

Push Your Luck
In early versions of the game, you would draw a certain number of tokens from a bag based on your speed.  In this version, each time a token is drawn the player can chose to stop and slow down or continue drawing tokens and possibly incurring a penalty.  This ratcheted up the decisions.  Instead of making 1 push-your-luck decision per turn, a player could end up making several different ones as their turn progresses.

Hand Management
I decided to thin the deck down to 5 cards and give all 5 to each driver to start the game.  This focused the game on your choices of when to play each card and removed the luck of the draw.  I also tried to create different decisions based on your opponent's play and your current hand size.

Each card is numbered 0 - 4.  The value of the cards indicates how much to increase your speed this turn.  Faster is pretty much always better.  Some cards also give you a bonus to handling. 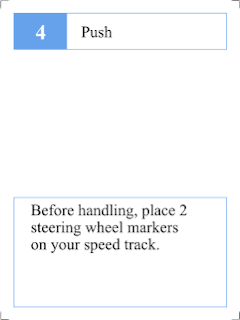 The Pass (3) and Block (2) cards can do different things base don your opponent.  The Pass card is actually better than the Push if your are behind in the race.  While the Block card counters the advantages of the Pass card.

Play Test
As I noted above, the game components and complete rules are available on BGG.  Please note your thoughts on that page and try out other games in the contest too.
Posted by Doug Schulz at 8:00 AM